It’s been a whirlwind two days since we met Archie Harrison Mountbatten-Windsor, our youngest, and cutest, royal. Proud parents Meghan, Duchess of Sussex and Prince Harry presented their days-old baby boy to the world in a photocall with the press, answering questions about Archie’s sweet disposition and sleep habits. This is also when an alleged “slip-up” from Harry and a sideways glance from Meghan sent conspiracy theorists into a frenzy, pulling out their calendars to point to alleged signs that this particular royal was actually born two weeks ago.

The moment in question starts when Meghan and Harry are asked who Archie resembles, Prince Harry said: “Everyone says that babies change so much over two weeks, so we’re sort of monitoring how this changing process happens over this next month really. But his looks are changing every single day so who knows.” The answer is brief and he quickly corrects himself, but not before Meghan supposedly shoots him a meaningful look.

Watch the entire exchange in this raw footage of the interview, starting at the 1:28 minute mark.

With so much emphasis placed on such a short few sentences, we decided to speak to Patti Wood, a body language expert and the author of Snap: Making the Most of First Impressions, Body Language, and Charisma, in the hopes she can break it all down for us.

“When he said ‘the last two weeks’ it came out very smoothly. Typically, when something is authentic, there’s a musicality to it, there’s a smoothness to it, there’s a naturalness to it,” Wood tells SheKnows after “reading” the video from the photocall. “Her comment [of ‘the last couple of days’] had me saying something’s not right, and his didn’t.”

She added: “The other thing that was really noticeable is her smile got crooked. Her mouth went asymmetrical. That’s when you have to act one way but you’re feeling another way. Typically she has a very balanced smile, so that was not her baseline behavior.” That, Wood emphasizes, could be due to discomfort on Meghan’s part. “She was obviously in physical pain. There was tension in her foot placement, her leg placement, how she was arching her back. There was pain on her face,” Wood said, adding, “It was extensive pain that was affecting all of her nonverbal [cues]. You always need to account for that and give a person grace for it.” 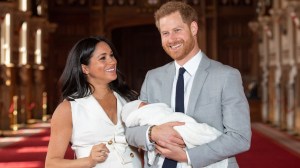 The harshest of critics would have to admit it’s quite a weird experience walking into a cavernous empty room with your newborn as cameras click off and reporters pepper questions at you. So, does Wood think it was a slip of the tongue because of fatigue and nerves? “I am curious, because there was more than one indication. There was initially her delivery, there was his statement; her extended look. Then it was him trying to fix it and ending up with another statement that made no sense in the context of two days.”

Whether it was just new-parent exhaustion, awkwardness, or whatever else, much has been made of a few words. Conspiracy theorists, who have been policing Meghan body throughout her pregnancy, are looking for any signs or clues that they’re assumptions are right. And trolls, who have spewed racist and misogynist language since Meghan came on the scene, are using this as ammunition for their next point of attack.

Meghan and Harry don’t owe the public a photocall, interviews, photos, or any part of their new baby. Whatever their decisions have been since about their child, it’s theirs alone to make. Parenthood is already hard enough, cut Meghan and Harry some slack and let’s go back to talking about how precious Archie is.