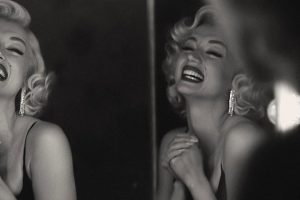 Netflix has officially dropped the teaser trailer for its upcoming NC-17 drama Blonde, which sees Ana de Armas as a reimagined Marilyn Monroe.

Written and directed by Andrew Dominik, the film is based on Joyce Carol Oates’ fictional novel of the same name and follows Marilyn’s upbringing and rise to fame with both fact and fiction:

“Based on the bestselling novel by Joyce Carol Oates, Blonde boldly reimagines the life of one of Hollywood’s most enduring icons, Marilyn Monroe. From her volatile childhood as Norma Jeane, through her rise to stardom and romantic entanglements, Blonde blurs the lines of fact and fiction to explore the widening split between her public and private selves.”

“Andrew’s ambitions were very clear from the start — to present a version of Marilyn Monroe’s life through her lens,” de Armas said. “He wanted the world to experience what it actually felt like to not only be Marilyn, but also Norma Jeane. I found that to be the most daring, unapologetic, and feminist take on her story that I had ever seen.”

“[Monroe is] deeply traumatized, and that trauma necessitates a split between a public self and a private self, which is the story of everyone, but with a famous person, that often plays out publicly, in ways that may cause additional trauma,” Dominik added. “The film’s very much concerned with the relationship with herself and with this other persona, Marilyn, which is both her armor and the thing that is threatening to consume her.”

Watch the teaser trailer above. Blonde premieres September 23 on Netflix.

Elsewhere in entertainment, a release date for Kid Cudi and Kenya Barris’ Entergalactic has been announced.
Source: Read Full Article