Home » Entertainment » And Just Like That, Charlotte, Miranda, and Carrie Are Back For the Sex and the City Revival

And Just Like That, Charlotte, Miranda, and Carrie Are Back For the Sex and the City Revival 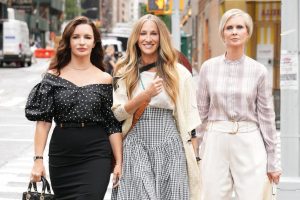 Production for HBO Max’s Sex and the City revival has officially begun! On Friday, the first official photo for And Just Like That… was shared, which features Sarah Jessica Parker, Cynthia Nixon, and Kristin Davis walking the streets of NYC together.

The limited series is set to follow Charlotte, Carrie, and Miranda as they navigate life in New York City as women in their 50s. Michael Patrick King will once again serve as executive producer, with Chris Noth, David Eigenberg, Evan Handler, Willie Garson, and Mario Cantone also returning. Meanwhile, Sara Ramírez is joining the cast as Che Diaz, a nonbinary, queer comedian who hosts a podcast that Carrie often appears on. According to Deadline, Che is “a big presence with a big heart whose outrageous sense of humor and progressive, human overview of gender roles has made them and their podcast very popular.” Keep reading to go behind the scenes of the upcoming reboot.