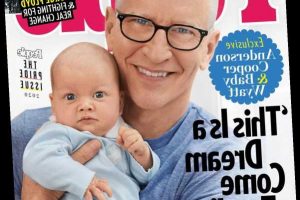 The CNN anchor graces the cover of People’s first-ever Pride Issue this week with his baby boy, Wyatt Morgan Cooper. In the accompanying interview, he speaks at length about adjusting to fatherhood as a single gay man while the country grapples with both the coronavirus crisis and large-scale protests against racial inequality.

“When I was 12 years old and knew I was gay and thought about my life, it always upset me because I thought, ‘I will never be able to have a kid,’” Cooper told the magazine. “This is a dream come true.”

“It feels like my life has actually begun,” he continued. “And I sort of wonder, what was I waiting for? This is a new level of love. It’s unlike anything I’ve experienced, and yet it’s also very familiar and incredibly special and intimate. It’s really extraordinary.”

Cooper, 53, announced on-air April 30 that he’d welcomed a son via a surrogate. Wyatt was named after Cooper’s father, who died when he was 10 years old. His son’s middle name, Morgan, is a family name from his mother Gloria Vanderbilt, who died last year.

Appearing virtually on “The Late Show” with Stephen Colbert days later, Cooper said that former partner Benjamin Maisani would be Wyatt’s co-parent. Though the couple split around 2018, Cooper said of his ex, “He’s my family, and I want him to be Wyatt’s family as well.”

In his chat with People, he thanked “all the lesbian, gay, bisexual, transgender and queer people who struggled for generations and have died never thinking this was a possibility.”

Becoming a parent at an unprecedented time in U.S. history made him feel “invested in the future in a way I hadn’t really before,” he said.

“There’s something about having a child that makes you feel connected to what is happening and you want to make sure that the world this child is growing up in is a better one,” he added. “You suddenly worry much more about the future of all of us.”