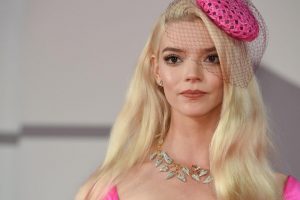 Anya Taylor-Joy dazzled pretty much everyone with her performance as Beth Harmon in Netflix’s sleeper TV hit, The Queen’s Gambit. Now, the critically acclaimed star’s chic new thriller has aired for the Venice Film Festival – and you better believe it proved a hit.

In fact, when the credits rolled on Last Night In Soho, everyone gathered in the Sala Grande theatre erupted into applause as they leapt from their seats to give the film a standing ovation.

Somewhat strangely, though, Taylor-Joy was nowhere to be seen.

As per Variety’s report, the spotlight shone on the cast, only to find Taylor-Joy’s seat empty.

“Confusion set into the auditorium,” writes Joel C Ryan, while festival goers have noted on Twitter that the film’s director, Edgar Wright, and Taylor-Joy’s co-star, Matt Smith, looked “unsure what to do.”

Thankfully, though, Taylor-Joy (dressed in a pink Dior Haute Couture gown with a matching beret) returned after a minute or so, to rapturous applause.

Considering the role that Taylor-Joy has taken on in the film, many believe that the absence was staged to ramp up the thriller’s mystery factor.

Here’s what you need to know about Last Night In Soho.

What’s the plot of Last Night In Soho?

The exact plot of Last Night In Soho, which was written by Wright alongside Penny Dreadful scribe Krysty Wilson-Cairns, remains something of a mystery at this point (Wright has urged critics not to share any spoilers).

What we can tell you, however, is this; the London-based horror follows Eloise, a young woman who is desperate to make her dreams of becoming a fashion designer come true.

Here’s where things get complicated, though…

As Eloise mysteriously finds herself entering the 1960s and coming face-to-face with Lara, a glamorous aspiring singer. But things are not what they seem, of course, and it’s not long before the world around her begins to crumble and fall apart.

Is there a trailer for Last Night In Soho?

You can watch the mind-bending (and deeply unsettling) teaser trailer for Last Night In Soho below:

Was it a dream? Or was it something more sinister?

Whatever the answer, you better believe people are already raving about the film on Twitter.

“Dude, that trailer is smokin’,” added another.

“IT LOOKS INSANE,” insisted one more.

And another, clearly enamoured with the film’s highly-stylised aesthetic, wrote simply: “This is stunning.”

No wonder people are branding it the best film of 2021 already, eh?

Who stars in Last Night In Soho?

Taylor-Joy, of course, dazzles as Lara in this twisted thriller, while Jojo Rabbit actor Thomasin McKenzie steps into the shoes of Eloise.

Thrillers on Netflix: 21 epic thriller films guaranteed to get your pulse racing

What are people saying about Last Night In Soho?

Speaking about the project on a 2020 episode of MTV’s Happy Sad Confused podcast, Taylor-Joy said: “When I watch bits of it back in ADR or whatever I am disturbed,.

“It’s very claustrophobic. The colours are so intense. It’s a really well-directed acid trip. I think people will really like it. You definitely will not be bored.”

Anya Taylor-Joy won Best Performance by an Actress in a Limited Series at the Golden Globes 2021.

Wright, meanwhile, promised Empire: “There’s something I have in common with the lead character in that I’m afflicted with nostalgia for a decade I didn’t live in.

“You think about ‘60s London – what would that be like? And the reality of the decade is maybe not what she imagines. It has an element of ‘be careful what you wish for.’”

And, at the Venice Film Festival, Wright explained that he made the film as an homage to the “psychological thrillers I really adore” made by British filmmakers Michael Powell and Alfred Hitchcock and Italian genre directors Mario Bava and Dario Argento.

“I guess I wanted to find a way to sort of make a London version of that,” Wright told Variety. “I actually live around the corner from most of the locations in [Michael Powell’s] Peeping Tom. So it’s something that’s never far from my mind, because it’s something I literally walk past every day.”

However, “It’s dangerous to romanticiae the past,” Wright cautioned.

When can we watch Last Night In Soho?

Wright previously announced that the film had been pushed back from September 2020 to April 2021, explaining that it had been delayed due to the ongoing pandemic. Because of course.

“Haunted by someone else’s past, but we’ll see you in the future,” he said. “It’s true, #LastNightInSoho is not quite finished yet due to Covid-19. But, I’m excited for you all to experience it, at a big screen near you, on 23 April 2021.”

However, it seems Wright – whose previous directing effort, Baby Driver, grossed $227 million at the global box office – was being a little optimistic with his scheduling.

As such, Last Night in Soho is currently slated to hit cinemas 29 October 2021. Meaning, yes, it will be ready to watch just in time for Halloween.

Will you be going to see it?