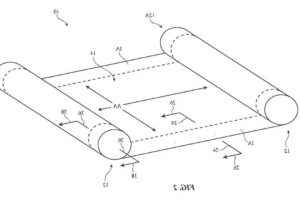 Apple has now registered a patent at the United States Patents and Trademark Office for a flexible, rolling display.

As the filing shows, the tech giant is now looking at developing a device featuring two separate housings which roll out to reveal a flat display in the center. Part of the patent also indicates that the devices could possibly feature both a rigid display and a rollable screen, both working together when expanded to offer a better user experience. While no specific device has been mentioned in the filing, Apple may very well utilize these rollable displays in a future generation of iPhones or iPads, the company’s two products most relevant to technology like this.

Of course, large tech companies like Apple which have massive research and development departments will often patent new ideas and technologies which never end up reaching the production line or seeing a commercial release, and the company itself hasn’t announced any products so far with a flexible or rollable display, so fans should definitely stay tuned for more information to come.