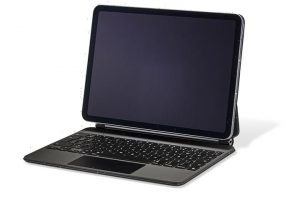 Apple is now rumored to be working on a new device featuring a large foldable display that can serve both as a tablet and laptop.

According to Bloomberg regular Mark Gurman, the tech giant is now in the process of developing what he calls an “iPad-MacBook hybrid.” Carrying a 20-inch folding display, the device will feature two screens that’ll bring up a keyboard and trackpad, with functionality fully based on touchscreens. A similar claim was made by Display Supply Chain Consultants CEO and analyst Ross Young, and Gurman expects the new tech to be released sometime in 2026, which coincides with the expected launch window for Apple’s long-rumored electric car.

As usual, Apple has yet to announce anything itself and given the predicted release dates to still be four years away, it’s unlikely the tech giant will confirm anything anytime soon, so those interested will have to wait a while longer before any official news comes out.

Elsewhere in the tech world, Meta has dissolved its AR and VR team developing the next operating system.
Source: Read Full Article