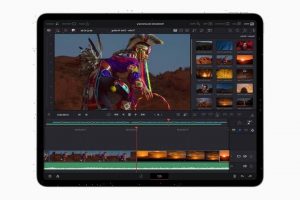 Less than two months out from Apple’s annual September Keynote, news of potential products, features and upgrades arriving in 2023 has continued to pop up. The switch to USB-C charging in iPhones will match current iPad technology while it is also expected that the iPhone 15 Ultra will feature a titanium body. Adding to 2022’s news, Apple recently launched the latest iPad Pro with an M2 chip. Expanding beyond this, The Information has reported that an insider has shared that Apple plans to release a 16-inch version of its iPad Pro.

Since the introduction of the iPad and continuous shifts in iPhone and iPad sizes, jokes of one product becoming another have popped up with each announcement. Now, it would seem Apple has taken things to the next level with this unprecedented iPad size. Likely targeted at creatives, it’s unlikely this size increase would mark the combination of the tablet and laptop markets for Apple. However, the lines between each continue to blur.

While Apple has yet to make any official announcement regarding this upgraded iPad Pro, early reports point towards a quarter four release in 2023. Stay tuned for more information as news regarding Apple’s 2023 plans continue to pop up.