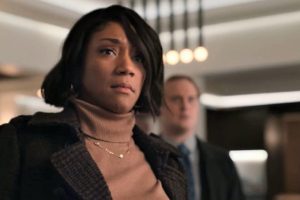 Take your true crime with not-quite so much gore? Apple TV’s The Afterparty is the murder mystery-comedy hybrid for you, coming to screens in 2022.

Our appetite for a good true crime series to hunker down with, especially in winter, continues to grow, but we recognise that after immersing ourselves in a grisly case, some light relief is definitely needed.

That’s where black comedies like The White Lotus and Only Murders In The Building come to our rescue, serving us the intrigue of a whodunnit without the gory details. And now, joining their ranks for 2022 comes Apple TV’s new series, The Afterparty.

Described as the “genre-bending event of the year,” the show focuses on one killer night told through eight different perspectives, each with an alternative series of events on a fateful night during a high school reunion.

And with an ensemble cast lead by Tiffany Haddish, that includes the likes of Sam Richardson, Zoë Chao, Ben Schwartz, Ike Barinholtz, Ilana Glazer, Jamie Demetriou, and Dave Franco, it seems we’re in for a treat.

In the opening moments of the newly released trailer, we meet our victim, watching someone fall to their death from a high window.

Cut to Dave Franco, taking the role of Xavier, a suave playboy millionaire whose mansion is hosting the reunion. From here, we get our first glimpses at the awkward and bewildered ex-classmates thrown together for a night they certainly won’t forget.

As we experience a Groundhog Day-like cut and rewind of fateful fall, it’s clear that we’ll get the chance to see the events leading up to the death from the perspective of each guest. And of course, everyone has seen something different.

Because as a flashing police news report, the body is in fact Xavier’s. The detectives roll in, and it is here that we meet Haddish as a straight-talking police woman trying to sift through the alibis to solve the crime.

“Any one of you could be the murderer, and I want to hear your story” she tells the partygoers. “The same thing could have happened, but you will have seen it a different way.”

And indeed, everyone is hiding something.

Watch the full trailer below:

Throughout the series, each of the eight episodes features a retelling of the same night through a different character’s perspective. Every episode has its own visual style and film genre to match the characters’ wide-ranging personalities.

“This is one of the most surprising, original, and fun projects we’ve ever made,” creators Chris Lord and Phil Miller said in a statement. “Our goal was to tell a comedic whodunnit story in a new and exciting way. By giving each episode its own unique style of storytelling, we were able to make what feels like eight distinctly different but interconnected films that highlight how everyone’s personal perspective and biases shape how they see the world.”

When and where can I stream The Afterparty?

Perfectly timed to add to your new year watch-list, The Afterparty premieres on Apple TV+ on 28 January 2022.