Home » Entertainment » Ariana Grande’s ‘Thank U, Next’ Video and More: 8 Things to Know From the Week in Pop Culture

Ariana Grande’s ‘Thank U, Next’ Video and More: 8 Things to Know From the Week in Pop Culture

What would you like to see here? Email us at [email protected]

Hello! Welcome to your daily roundup of what’s going on in pop culture.

It’s time for me to listen to Christmas music and only Christmas music. This year, I’m adding Phoebe Bridgers’s “Christmas Song” to my regular rotation of Medieval choral music, Mariah Carey songs and piano albums. It’s sweetly sad, in classic Bridgers fashion, but still has some bells.

There have been teasers, gifs, photos and now finally the video for “Thank U, Next” is out. It riffs on teen comedies like “Legally Blonde,” “13 Going on 30,” “Bring It On,” and, mostly, “Mean Girls:” Grande adds pictures of her ex-boyfriends to her “Burn Book” and Kris Jenner plays the “cool mom.” break up

When Daniel Baker (a.k.a. Desus Nice) and Joel Martinez (a.k.a. The Kid Mero) split with Viceland in June, they announced they had signed on to take their late night show to Showtime. Now we have an airdate for the series: Feb. 21. Read this Times magazine profile on the pair.

“I was a movie-struck kid, and I learned much from watching the screen, including things about men and women that I later had to unlearn or learn to ignore,” writes Manohla Dargis. Her essay re-examining what the movies taught her about being a woman post-#MeToo is thoughtful, moving and beautifully produced.

Grimes has released a new song called “We Appreciate Power.” That power appears to belong to “A.I. overlords,” and the video has Grimes and her fellow musician Hana rotating through space in catsuits, wielding blasters and crossbows.

The sequel machine rumbles on, with Margaret Atwood announcing she is writing one for “The Handmaid’s Tale,” the dystopian classic she published more than 30 years ago. “The Testaments” will come out in September 2019 and will be set 15 years after the final scene of “The Handmaid’s Tale,” featuring three female narrators. Fingers crossed it turns out better than Season 2 of Hulu’s adaptation. 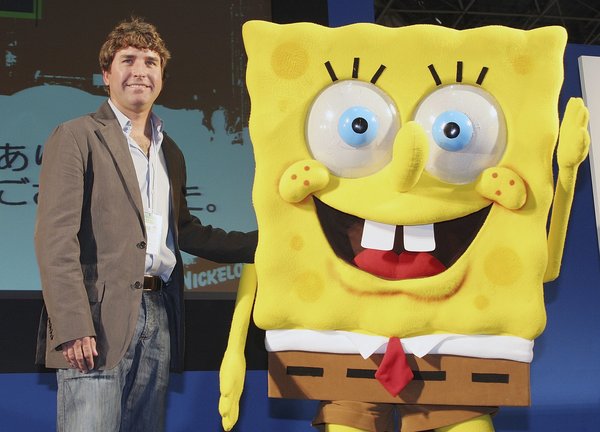 The TV and movie worlds lost four big names over the past week:

• Stephen Hillenburg. The creator of “SpongeBob SquarePants” announced last year that he had Lou Gehrig’s disease. Hillenburg worked as a marine biology teacher before creating the show, which has been spun into a Broadway musical, two films and countless internet memes.

• Bernardo Bertolucci. The director is best known for “Last Tango in Paris” (1972), which caused a furor for its depiction of an intense sexual relationship and whose star, Maria Schneider, later said she felt traumatized filming an infamous rape scene with Marlon Brando.

• Ricky Jay. As an actor, Jay played a camera operator in “Boogie Nights” and a cardsharp in “Deadwood.” As a magician, he was the subject of a classic New Yorker magazine profile and was a frequent David Letterman guest.

• Nicolas Roeg. The British filmmaker worked with Mick Jagger in “Performance” and David Bowie in “The Man Who Fell to Earth,” and his psychological thriller “Don’t Look Now” has inspired countless directors who came after, including Danny Boyle.

7. Taking ‘Showman’ on the road

“The Greatest Showman” is the critically panned fan-favorite movie that just chugs on. (When we asked readers why they loved the movie, we got over 1,200 responses.) Now Hugh Jackman is taking the show on the road, or at least some of it: He’ll be singing songs from the record-breaking “Showman” soundtrack on a world tour next year. Prepare yourself.

A.O. Scott says that “Happy as Lazzaro” has “the urgency of a news bulletin and the authority of a classic.” Directed by Alice Rohrwacher, the film is a sort of modern fairy tale, with the titular character happy despite his circumstances. You can stream it on Netflix.