When did “sentimental” become a bad word?

I’ve always felt the opposite. I became an actor because I enjoy being moved, and therefore strive to move others. I don’t know how one pursues a life in the arts without sentiment. And yet that word has been discredited, or even weaponized, to mean “cheap” or “trite.” It’s as if we don’t want to get caught feeling too much these days.

At the end of April, I opened my seventh Broadway show, “Beetlejuice,” at the Winter Garden Theater. I am immensely lucky. Yes, there are two decades of hard work behind me, thousands of “Nos” for every “Yes,” and I had the goods to stick with it.

But let’s be real. I’m also lucky. My successes are not wholly my own. I share them with those who provided me the millions of nudges, inadvertent and purposeful, that helped me. So when I noticed a small, sentimental moment of serendipity last week, I decided to celebrate it with a stranger.

In 1996, Mrs. Entwistle and Mrs. Gerrish — my sixth grade teachers at David E. Owens Middle School in New Milford, New Jersey — decided to teach us about T.S. Eliot and his cats. The lesson culminated in a trip across the George Washington Bridge to see what was then “Now and Forever” at the Winter Garden on Broadway.

We were not a theatrical family, and while my Dad can really sing and my Mom enjoyed the arts in school, theater was not on my radar growing up. So, it being my first Broadway show, I kept my ticket stub and Playbill, which I have continued to do for almost every show since. (Apologies to Marie Kondo and my loving wife.)

When “Beetlejuice” moved into the theater and I walked out onto that stage, I couldn’t help but glance up at the house-right side of the mezzanine. I instantly remembered the inverse view, and the little boy whose view it was, unaware of the permanent tattoo being inked into his core. There’s a “Memory” joke to be made here, but I’ll spare us. After all, I’m sentimental, not cloying. I acknowledge the difference.

That sixth grader had no sense that something had just begun. I’m willing to bet that I adored every second of the show. But the 11-year-old anti-sentimentalists in my class had already begun to chip away at me. So “Cats” was “weird,” or even “dumb.” Being in love with Broadway wasn’t exactly cool.

Ten years ago, I was at La Jolla Playhouse doing the out-of-town tryout of what would become “Chaplin.” Before a 9:30 a.m. student matinee, my voice was not waking up. Panicked, I started running the seats of the theater, hoping the physical exertion would get my voice moving. Starting down by the stage, I ran horizontally through row A, then B, and so on, touching each seat as I passed.

Not only did it do the trick vocally, but I suddenly felt very connected to the room. Since that day, I’ve tried to run the theater before every performance, at theaters around the world, including the 10,000-plus seat Muny in St. Louis. I claim it’s solely as a warm-up, but I would be lying if I said it hasn’t become somewhat, dare I say, sentimental.

As I ran the Winter Garden for the first time, I paused at MEZZ D8, my seat from 23 years earlier. (I have the stub to know for sure, but I could have come close without it.) I had an idea. On opening night, I would reach out to 6th grade me and tell him it’s O.K. to fall in love with Broadway, and that dreaming big isn’t something to be sheepish about.

“23 years ago, being on Broadway was an unfathomable fantasy,” I wrote. “Tonight, I’ll be playing Adam Maitland in the show you’re about to see … I don’t know who you are or what your aspirations might be, but it’s possible.” 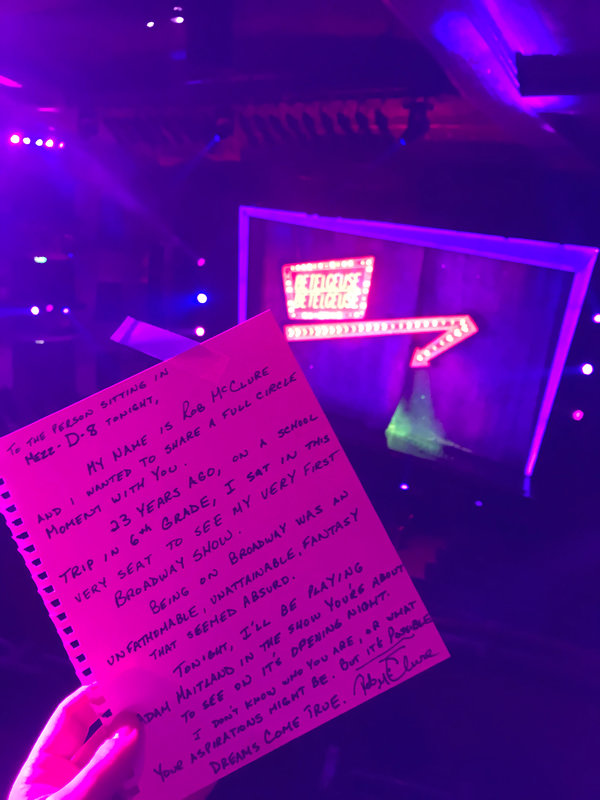 I finished the note, tweeted a quick photo, Scotch-taped it to the seat, and finished my run. Within hours, it had been retweeted over a thousand times, to millions of people.

Over the years, I’ve primarily used Twitter to share my latest projects, engage in political discourse, or make what felt like necessary arguments for or against the latest topic of outrage.

Those posts were all lost to the ever-expanding ether of quarrelsome noise. And yet one small, sentimental act exploded. Turns out I’m not the only one craving sentimentality.

P.S. I still don’t know who found the note.