At Art Basel Miami Beach, a Revamped Venue and a Focused Program

For art fairs, consistency is next to godliness. Deep-pocketed patrons like to be surprised, and sometimes even jarred, by the works for sale, but not by the surroundings.

Even so, everyone likes a little spiffing up. And the Miami Beach Convention Center, which hosts the 17th edition of Art Basel Miami Beach from Thursday to Sunday, has completed a three-year, $615 million renovation that added 10 percent more space and took away the 1980s-era pastels that were burned into the brains of visitors.

“Those ‘Miami Vice’ memories are gone,” said Noah Horowitz, Art Basel’s director of the Americas and the chief of the Miami Beach fair.

This year, more than 250 galleries from 35 countries will show their wares. Although the floor plan of the fair is largely the same as last year, the changes mean that “the overall visitor experience is vastly improved,” Mr. Horowitz said.

The striking, hurricane-resistant exterior features about 500 angled aluminum fins intended to evoke waves. The seated restaurant has been moved out of the Collectors Lounge so that it’s accessible to the public. And galleries in the Edition sector, for prints and multiples, are now spread out across the hall, instead of clustered together.

Organizers are most excited about a new ballroom with 60,000 square feet of columnless space, and they are filling it with a special commission by the Mexican artist Abraham Cruzvillegas.

The piece, “Autorreconstrucción: To Insist, to Insist, to Insist…,” a version of a work he has presented before, is composed of a sculpture made from locally found materials and suspended from the ceiling. It will include periodic performances arranged by the choreographer and co-creator Bárbara Foulkes. 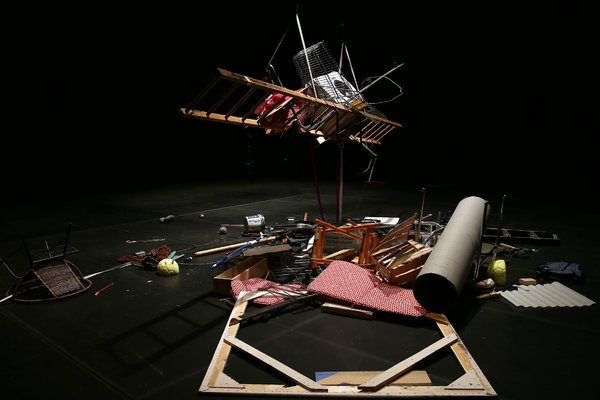 But as it expands and refreshes, Art Basel Miami Beach is also cutting two sectors that have been around for years: Public, its presentation of outdoor sculptures in front of The Bass art museum, and Film. It’s a relatively unusual move in an era that has seen consistent sector creep at most fairs, as organizers try to provide something for everyone.

“It was a difficult decision for us,” Mr. Horowitz said. “This is a transitional year.”

He noted that in 2019, when a planned renovation of the convention center’s outdoor spaces is completed, the fair intends to use them for an installation of sculptures.

Public and Film took place outside the convention center. Marc Spiegler, the global director of Art Basel — which also presents fairs in Basel, Switzerland, and Hong Kong — said that the cuts came from a desire to gather collectors closer in to the main event.

He added that putting on the event during three years of construction had challenges, but it didn’t stop the fair from presenting successful editions.

Nor did it stop collectors like Romero Pimenta, an exporter of precious gems based in Belo Horizonte, Brazil, who has attended the fair since the beginning.

Mr. Pimenta began collecting about 25 years ago, starting with Brazilian artists like Hélio Oiticica, Lygia Clark and Mira Schendel, and then moving on to contemporary makers from all over the world, including Charline von Heyl and Jim Hodges.

It’s that very kind of mix that brings him back to Miami Beach year after year.

“I like the fair because it’s an opportunity to see Latin American art among the international art in general,” Mr. Pimenta said. “It’s good to compare.” He added that new discoveries were also a focus.

“If you want to buy names that everyone already knows, you can go to auctions,” he said. “I want to learn about artists I’ve never heard of.”

Mr. Pimenta’s devotion to the fair highlights its established role as “a bridge between the North and South American art markets,” as Mr. Horowitz put it.

This year, around 31 galleries hail from Latin America or have a branch there — in the increasingly global art world, the distinction is worth noting.

Mendes Wood DM, for instance, was founded in São Paulo, Brazil, but now has branches in New York and Brussels, and has been showing in Miami Beach for seven years.

Felipe Dmab, one of the gallery’s owners, said that the event was a “meeting point between Latin America, Europe and the U.S.”

He added that the strength of local private collections was part of the appeal for dealers, citing the Rubell Family Collection among others. “Miami has some of the best collectors in the world,” he said.

About 29 galleries are making their first appearance at the fair for this edition, including Walden, of Buenos Aires.

“Basel represents one of the best brands in the art world,” he said. “It’s a place to be seen, and most of the biggest collectors in the world make their purchases of Latin-American art at Miami.”

In the Survey sector, Walden will present embroidered fabric works by the Paraguayan artist Feliciano Centurión that tackle gender roles and the divide between public and private life, including several untitled works from his “Mantas” series.

“It’s innovative because of the way he leaves the medium of the traditional canvas behind and moves to the blanket,” Mr. Ocampo said of the Centurión works. “Collectors will be surprised.”

Another dealer making a debut is Parque Galería of Mexico City.

“We’re very excited,” said Mauricio Cadena, the director of Parque Galería. “It’s an achievement to get into Art Basel Miami. It means you have done something right.”

In the Positions sector, for solo shows, Parque Galería presents works from the Ecuadorean artist Oscar Santillán’s series “Dawn and Dusk Seen at Once.”

The series traces an 1874 expedition of Mexican astronomers who visited Japan to observe the transit of Venus, and the works on view include the 2018 video “Astronaut Haircut Report.”

Despite the distinct Latin flavor, Mr. Spiegler warned against overemphasizing the connection. “The majority of the galleries are from the U.S. and Europe,” he said.

Many of the New York art world’s veteran dealers will be on hand, as usual. Paula Cooper Gallery, for instance, will show works by Sherrie Levine, Sarah Charlesworth, Lynda Benglis and Jennifer Bartlett, and Sperone Westwater will show Wim Delvoye, Peter Halley and Tom Sachs.

Even though dealers make a living by trying to stand out at the fair, emphasizing subtle distinctions between their neighbors in the rows of booths, there is universal agreement on one topic: Sunshine sells, and the local climate has provided an engine for the event since the beginning.

As Mr. Spiegler put it, “Miami takes place at a time of year that’s beautiful, and it’s not as beautiful most other places.”