WASHINGTON — Melissa Peterman, the actress and comedian, scooped up Kristin Chenoweth like a bride, whisking her off the stage as Reba McEntire blew kisses from the balcony.

With a hand over his heart, Lin-Manuel Miranda performed “One Last Time” from “Hamilton,” earning a standing ovation as he honored the Broadway musical he created.

And at the sight of Cyndi Lauper, ready to perform, Cher bellowed across the Kennedy Center Opera House, “You told me you were going to Los Angeles.” (“I lied,” Lauper yelled back.)

It was all part of the sequined fete at the Kennedy Center Honors on Sunday, where a star-studded menagerie of artists, political leaders and Washington socialites gathered to recognize a handful of artistic titans for their cultural contributions.

For the honorees — McEntire, Cher, the jazz saxophonist Wayne Shorter and the composer Philip Glass — there was no shortage of laughter, praise and tears. In tribute after tribute, they were called trailblazers, icons and legends by their colleagues and the performers they inspired.

But Sunday was a night to reflect not just on the legacy of the artists who watched compilations of their work. It was a night, several of them agreed, to ponder the future of the American arts. 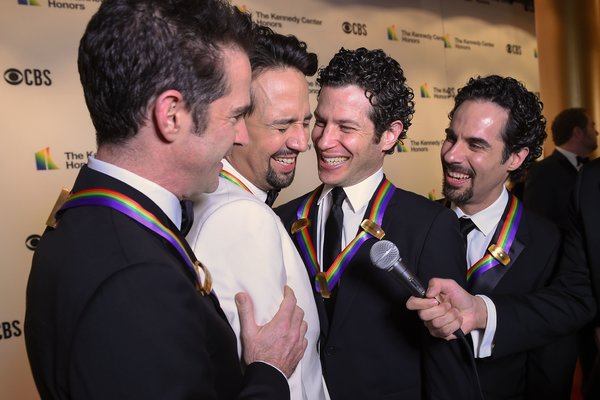 The sentiment was strongest in the adulation of the creators of the Broadway musical “Hamilton,” who accepted a special honor for a “transformative work that defies category” nearly four years after its Off Broadway debut. It was the first time an entity, rather than an individual, was honored.

All four men who received special medals for “Hamilton” — Miranda, the creator; Thomas Kail, the director; Andy Blankenbuehler, the choreographer; and Alex Lacamoire, the musical director — remain eligible in the future for their own individual work.

“There’s something about being recognized by the country in this fashion,” Lacamoire, who composed the musical’s score, told reporters on Saturday. “I never imagined that anything of what I do leading to this room, in this place.”

As he spoke, he stood feet away from Thomas Jefferson’s writing desk, where the nation’s third president — and the musical’s second-act foil to Hamilton, the nation’s first Treasury secretary — is said to have drafted parts of the Declaration of Independence.

“This is a celebration of our collaboration,” Miranda told reporters on Sunday before the show, which will air on CBS on Dec. 26 at 8 p.m. Eastern. Miranda and Lacamoire, both visibly emotional, performed two songs from “Hamilton” alongside other members of the original cast and members of a youth choir.

Treasury Secretary Steven Mnuchin was spotted at the event, but President Trump did not attend after returning from the Group of 20 summit in Buenos Aires early Sunday morning. Instead it was Representative Nancy Pelosi, poised to reclaim the speaker’s gavel, dancing and clapping in the box traditionally occupied by the honorees, the president and the first lady.

Brief hints of a political undercurrent surfaced in some toasts at Saturday’s dinner and Sunday’s ceremony. With an administration that has proposed funding cuts for the arts, and honorees who have been vocal with their presidential criticism, it was almost to be expected.

There was a reminder, from Christopher Jackson, who originated the role of George Washington in “Hamilton,” at Saturday’s dinner that the musical’s muse — Hamilton was born in the Caribbean — could have been entangled by today’s immigration laws.

There was a tribute to President George Bush, who died on Friday and who always indulged in the annual festivities in the same box as the honorees.

And, well, there was Cher.

Speaking to reporters as she posed underneath the rows of flags in the State Department on Saturday, she said she was just relieved that President Trump, for a second year, would not be in attendance.

“Oh, God, I couldn’t,” she said. “Someone would have to give me the little honor in the bathroom.”

But again and again, another affirmation emerged: In a time of partisan division, the arts would be there for inspiration, hope and growth.

“When you leave this country, you discover that the rest of the world sees America through the arts that come from America,” Glass said on Saturday, after he was presented his medal. Like all of the honorees, he still seemed to be processing that it was his work being honored.

“This moves me beyond words,” McEntire said, her eyes filling with tears as she held her medallion for the first time.

The members of the “Hamilton” crew’s place in the ceremony served as a reminder of what more was to come, even as they took a place among the Kennedy Center honorees.

“A night like tonight says, just keep going,” Blankenbuehler, the choreographer, said. “Just keep flying through the air, and don’t look back, and don’t question. Just believe that things can happen if you dream them up, like the people who inspired us.”