Home » Entertainment » At the Grammys, Messages of Hope Prevail

At the Grammys, Messages of Hope Prevail

Read our analysis and coverage of the ceremony.

Messages of inspiration and hope prevailed at a colorful and uplifting Grammy Awards on Sunday, defying expectations that the event would be drab. The stars also all but steered clear of any political messages.

The host, Alicia Keys, set the positive tone by telling personal stories and speaking often of peace and love. And she lead the event with an all-star moment of female solidarity, which included a surprise appearance by Michelle Obama, who said that music “has always helped me tell my story,” and “allows us to hear one another, to invite each other in.”

Obama wasn’t the only unexpected attendee with a message of empowerment. Drake, one of the most nominated artists this year, with seven nods and one win, showed up to accept the award for best rap song for his smash “God’s Plan.” 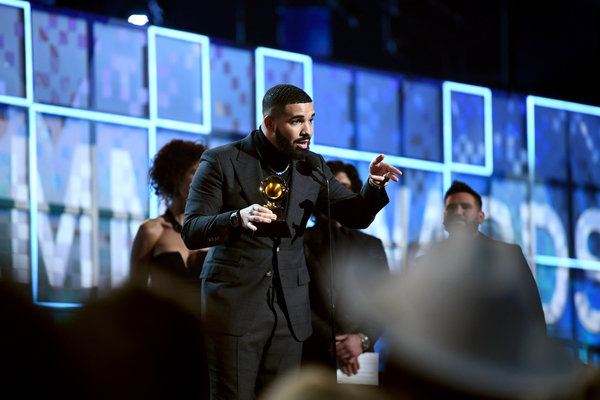 Drake, who has skipped the Grammys in recent years and turned down an offer to perform at this year’s show, used his time on stage to speak to other artists and to children who aspire to music fame. His message: That awards like the Grammys are not a measure of success in the music industry.

“We’re playing in an opinion-based sport, not a factual-based sport,” he said, explaining that music is a business where powerful people who don’t necessarily understand artists’ experiences are often making the decisions.

“The point is you’ve already won if you have people who are singing your songs word for word, if you’re a hero in your hometown, if — look, look — if there’s people who have regular jobs who are coming out in the rain, in the snow, spending their hard-earned money to buy tickets to come to your shows, you don’t need this right here, I promise you that, you already won,” he said, holding up his Grammy.

Not long after, Diana Ross, in a flowing red gown, celebrated her upcoming 75th birthday with two hits from her solo career: “The Best Years of My Life” and “Reach Out and Touch (Somebody’s Hand).”

She punctuated her performance by speaking to the crowd. “So much love in this room,” she said. “Together we have no limits. There’s only success ahead and you can lead the way. Learn, dream, unlock new doors. All is possible.”

Earlier in the night, Lady Gaga accepted an award for “Shallow” from “A Star Is Born” and said she was proud to be part of a movie that addresses mental health issues. “A lot of artists deal with that, and we’ve got to take care of each other,” she said, adding, “So if you see somebody that hurting, don’t look away.”

And Dua Lipa, winner for best new artist, clapped back at Neil Portnow, the chief executive of the Recording Academy, who said last year that women in music should “step up” to advance their careers.

“I guess this year we really stepped up,” Lipa said, accepting her award, referring to the strong showing by women this year.

“For anyone that hasn’t realized how special they are to have a different story, a different background, a name that honors their roots because they just want to be normal, whatever the hell that means,” she went on, adding, “never let that get in the way of you and your dreams, because you deserve it.”

END_OF_DOCUMENT_TOKEN_TO_BE_REPLACED

END_OF_DOCUMENT_TOKEN_TO_BE_REPLACED
We and our partners use cookies on this site to improve our service, perform analytics, personalize advertising, measure advertising performance, and remember website preferences.Ok