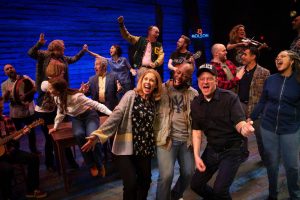 A musical about 9/11 may not seem like a joyous event, but the arrival of a Tony Award-winning production is welcome news for the country’s events sector.

Come from Away, which debuted on Broadway in 2017, tells the true story of what happened when 38 planes were diverted to the small town of Gander in Canada after the 9/11 terror attacks grounded air travel in North America.

The musical details the stories of how the small town coped with its population doubling overnight and how the residents helped the 7000 stranded residents.

It will hit Auckland’s Civic Theatre in April 2022 – the first international musical to strut the iconic stage since The Book of Mormon’s season was cut short by the March 2020 lockdown – before skipping down to Wellington’s St James from May.

While the premise may sound grim on the surface, Auckland Unlimited’s chief executive, Nick Hill, said that it is anything but with the focus on community support rather than the tragedy itself.

“I heard that after every show in Melbourne, there was a standing ovation, and you leave the theatre feeling warm and positive about people and the world.”

He said he is “tremendously excited” to get international acts back in the venue, particularly with the events sector being hit with multiple lockdowns and restrictions.

“It’s been good when we were able to move relatively freely after the first lockdown, and it’s been great for New Zealand content, but it’s great to have that international show here that gets people excited, something that’s new and fresh that will bring people back into the centre of Auckland.

“It really feels like there’s some light at the end of the tunnel,” Hill said.

While more international acts will head to the Civic, Hill said that one of the silver linings to the cloud of Covid is that New Zealanders came out to support local talent, with local productions of Jersey Boys and Mary Poppins filling the void.

“We’re very keen to generate a lot of content.”

Come from Away picked up the Tony Award for Best Direction of a Musical, before going on to scoop Best New Musical at the Olivier Awards after its West End debut. A live version of the production was released on Apple TV+ in September to mark 20 years since the terror attacks.

The musical will hit the Civic Theatre on April 20, and arrive at the St James in Wellington on May 20. Musical lovers can join the waitlist for pre-sale tickets at comefromaway.co.nz.