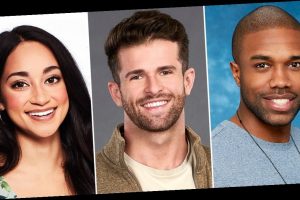 Liar, liar, roses on fire! Several contestants on The Bachelor and The Bachelorette have been accused of lying about their pasts while competing on the ABC reality series.

While Ben Flajnik, Jillian Harris, Ali Fedotowsky and more leads have had to deal with controversial contestants, Peter Weber’s group of girls have faced the most allegations. Sydney Hightower, for her part, fired back on social media after one of her former classmates questioned the story she told the pilot about being bullied at her Alabama high school.

“Any one from my high school want to pull out the videos of girls stuffing my locker with Oreo cookies, vandalizing my home, shoving me in the hall ways? Teachers literally referring to me as a halfbreed? Calling my mother the worst names I’ve ever heard in my life? I doubt that,” Sydney wrote on Twitter in February 2020. “Shame on you. Shame on you for spreading hate and trying to construe something on the internet to hurt another human being. “I don’t know you, but I do remember you from high school and your social group did not care for me. And that’s OK. Because I would never want the approval of hateful, racist human beings.”

During the hometown dates on season 24, Peter’s ex-girlfriend Merissa Pence came on the show to warn him about Victoria Fuller. Merissa subsequently told Peter that Victoria was the reason several relationships “ended” in the past.

After filming the season, Victoria seemingly addressed the allegations in a cryptic Instagram post about “rumors” circulating about her.

“There will be a time & place where I can defend myself, but for now I choose to wait,” she wrote at the time. “HOWEVER, bullying is NOT ok. Nor is it fair. Especially when casting judgement and basing opinions upon pure speculation, assumptions, & LIES.”

Scroll through for a roundup of contestants who were accused of omitting the truth about themselves:

END_OF_DOCUMENT_TOKEN_TO_BE_REPLACED

END_OF_DOCUMENT_TOKEN_TO_BE_REPLACED
We and our partners use cookies on this site to improve our service, perform analytics, personalize advertising, measure advertising performance, and remember website preferences.Ok