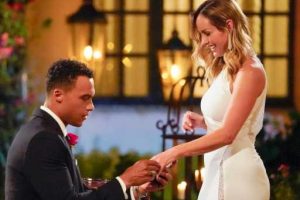 It was evident to Bachelorette fans that Clare Crawley and Dale Moss were operating at two different speeds when it came to their relationship. Now the couple has officially put the brakes on their blink-and-you-missed-it engagement after only months together.

It was a love train that sped out of the station before Moss even know what hit him — and apparently he had to take back control of his story. “Dale felt that he is not ready for marriage and was not ready to move to Sacramento for Clare. They were making a lot of plans that Dale could not commit to,” a source revealed to E! News about their life out of the spotlight.

It was pretty clear that they were at “different places in life,” especially since Crawley has settled in the Sacramento area to stay close to her mother, who is suffering from Alzheimer’s disease and lives in a care facility. Moss, meanwhile, always seemed happier at home in New York City, and he’s been public about his ambitions to pursue a career as a TV personality. “Currently, I am a model with Wilhelmina International, and a sports and entertainment host,” Moss told Midco Sports Network. “That’s always been one of my focuses. I think how Ryan Seacrest has built a brand and really an empire is really amazing, and I would love to model my career after him.”

We’re guessing the breakup was led by Moss, seeing as he’s the only one who posted a comment about the split, while Crawley has been completely silent on social media. “We appreciate the love and support we’ve received from so many people, but this is the healthiest decision for both of us at this time,” Moss wrote on Instagram. “We strongly believe in leading with love and always remaining true to oneself – something our families have taught and instilled in us throughout our lives. We only hope the best things for one another.”

Even if the former Bachelorette is devastated by the split, (and we don’t know — see social media silence, above) her friends are reportedly relieved that the relationship is over. “Many of Clare’s friends were always skeptical of the relationship and Dale’s intentions,” E! News’ insider said.

The good news for Bachelor Nation: That leaves both of them free to appear on Bachelor in Paradise this summer. Who is taking bets that at least one of them will compete on the show?

Click here to see all the celebrity couples who met on set.