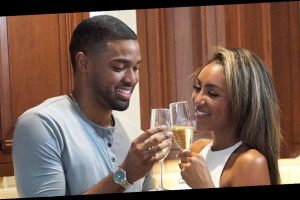 Not settling! Tayshia Adams ended a meaningful relationship after going on hometown dates with her final four during the Tuesday, December 15, episode of The Bachelorette.

Chris Harrison explained that the men’s families came to the resort, quarantined and underwent coronavirus testing to meet Tayshia. First, the host encouraged Tayshia’s suitors to put together dates that were similar to what they would normally do in their hometowns if they had been allowed to travel.

Tayshia hoped for validation from Brendan during their date, which began with playing carnival games with his niece. They each saw what the other would be like as a parent, and Tayshia felt they had a strong foundation heading into her introduction to his loved ones. Brendan’s family assured her he was ready for marriage, and Tayshia revealed when the date was over that her connection with Brendan had only grown stronger.

Former ‘Bachelorette’ Winners: Where Are They Now?

She was nervous to meet Zac’s relatives because she knew how close they were. He showed Tayshia what a typical day in New York could be like for the two of them, noting that she told him she was thinking about moving there. Tayshia believed she could be really happy with Zac, while he admitted that he wanted a wife and kids after previously denying to his family that he did. Tayshia hit it off with his relatives and had no hesitations about her relationship with Zac.

Ivan showed Tayshia a piece of his heritage by cooking Filipino food with her, which helped them picture their possible future. Ivan’s parents were skeptical about his feelings for Tayshia, but she won them over. Ivan told his mother he wasn’t ready to propose yet, but he thought he could get there by the end. His brother then surprised him with a visit, and he also approved of Tayshia.

Ben had the final hometown date, during which he gave Tayshia a taste of his life in California. She hoped Ben would finally share his feelings with her, but despite realizing he was in love with her, he failed to tell her. He later decided to make the declaration after the rose ceremony.

Tayshia confessed she was falling for all four men, but she ultimately sent home Ben. He assured her he would be fine, although he was heartbroken. His reaction, which Tayshia called “disappointing,” frustrated her more because he showed no emotions. She was tired of pulling things out of him and cried after his departure. Meanwhile, Ben said he wanted to marry her and wondered if she didn’t know how he felt about her.

The Bachelorette airs on ABC Mondays and Tuesdays at 8 p.m. ET.

END_OF_DOCUMENT_TOKEN_TO_BE_REPLACED

END_OF_DOCUMENT_TOKEN_TO_BE_REPLACED
We and our partners use cookies on this site to improve our service, perform analytics, personalize advertising, measure advertising performance, and remember website preferences.Ok