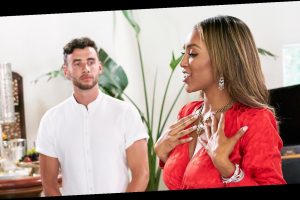 Not ready for a ring. Brendan Morais was “caught off guard” by meeting Bachelor Nation jeweler Neil Lane during his fantasy suite date with Tayshia Adams, a source exclusively tells Us Weekly.

‘Bachelor’ and ‘Bachelorette’ Engagement Rings Through the Years

“It freaked him out a little bit,” the insider tells Us. “He does want a wife and he wants kids, but the whole process took him by surprise, and he didn’t realize how quickly he was being asked to get down on one knee. It just wasn’t something he was ready for in the end. It was a lot for him to take in. Marriage is something he doesn’t take lightly.”

During season 16 of The Bachelorette, Brendan and Tayshia, both 30, bonded over their respective failed marriages.

“He was being super honest to Tayshia about how he wasn’t ready for marriage and how he was still broken over his last marriage — that’s not something he would lie about,” the source tells Us. “He was really young when he first got married. His divorce was something he took very seriously.”

Everything Bachelorette Tayshia Adams Has Said About Her Ex-Husband

After spending time looking at jewelry with Tayshia and Lane during the Monday, December 21, episode of the ABC series, Brendan decided to leave before the overnight portion of their date.

According to the source, Brendan “knew” he was one of the frontrunners, but he wasn’t confident that Tayshia was going to pick him. “He thinks Tayshia’s a sweetheart, and I know he was genuinely sorry if he hurt her when he said goodbye,” the source adds. “He’s focused on being with his family right now. He’s very close to his family and he’s close to his friends.”

After Brendan’s exit, Ben Smith, who was eliminated during hometowns, returned for a second shot with Tayshia, revealing he was in love with her.

‘Bachelor’ Contestants Who Returned After Elimination

“I blew it by not telling you in the moment. I’ve never felt this feeling, so I was just terrified,” Ben told Tayshia. “But I am in love with you. Like, the life we could have together. The thought of that, it keeps me awake at night. And I’m not sure what to do right now, I’m not sure what I’m asking for. I don’t even know what I’m doing. I just couldn’t leave. But I just had to tell you. Like, I see a life with you.”

The episode ended on a cliffhanger, with Zac Clark and Ivan Hall waiting for the rose ceremony. The Bachelorette concludes on ABC Tuesday, December 22, at 8 p.m. ET.

END_OF_DOCUMENT_TOKEN_TO_BE_REPLACED

END_OF_DOCUMENT_TOKEN_TO_BE_REPLACED
We and our partners use cookies on this site to improve our service, perform analytics, personalize advertising, measure advertising performance, and remember website preferences.Ok