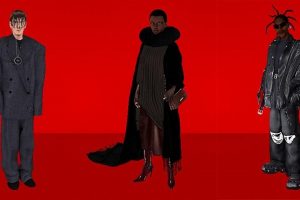 Balenciaga‘s red carpet-themed runway show for Spring/Summer 2022 took social media by storm, and in a futuristic turn of events the Demna-helmed label has now teamed up with the Paris-based artist Claudia Maté to create its SS22 campaign.

Never one to shy away from standing out from the crowd, Balenciaga opts to put its models — namely Tommy Blue, Eugenie Bondurant, Marie-Agnès Diene, Abdou Diop, Zinedine El Ouazzani, Gwen Lu, Aki Nummela, Anania Orgeas, Hansi Schmidt, Minttu Vesala, and Inti Wang — into the realm of CGI. Maté, whose work combines video, programming, interactive 3D, game design, VR, and sound, was enlisted to reimagine the models and their looks in her signature style, and the result is something quintessentially Balenciaga.

Appearing equal parts retro and futuristic, the campaign spotlights virtual reality characters wearing the XX, Hourglass, and Triplet handbags on the computer-rendered red carpet alongside ready-to-wear pieces, eyewear, jewelry, and footwear that dominated not just the runway, but also this season’s most-wanted list.

Standout pieces in the campaign include the $6,050 USD Upcycled Biker Jacket, the just-released HardCrocs, the Bat Rectangle sunglasses, and a gray iteration of the Space Shoe.

Take a look at the campaign above, and buy the real deal in-stores and online now.