Home » Barack Obama and Bruce Springsteen are releasing a podcast together, and we’re obsessed

Barack Obama and Bruce Springsteen are releasing a podcast together, and we’re obsessed 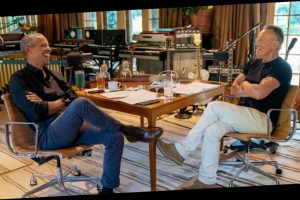 Barack Obama and Bruce Springsteen’s Renegades: Born In The USA will see the longtime friends discuss topics including race, fatherhood and the future of America.

We may only be two months into 2021, but it’s already shaping up to be a good year for new podcasts.

From Bella Mackie and Greg James’ Teach Me A Lesson to Mayim Bialik’s Breakdown, there’s been plenty of brilliant new titles to get stuck into – and if today’s news is anything to go by, that trend seems set to continue.

As part of a new collection of exclusive content for the platform, Spotify has announced it is releasing a new podcast series hosted by none other than Barack Obama and Bruce Springsteen.

Best new podcasts of 2021, including The Apology Line and The Panic Years

The eight-part series, called Renegades: Born In The USA, will see the longtime friends get together to share their stories of America and discuss topics including race, fatherhood, marriage and their own personal and professional journeys.

Throughout, the pair will also explore the work that needs to be done to get America to a position of unity, compared to the divisive place the country finds itself in today.

In the first two episodes, which are available now, the pair reflect on their unlikely friendship and discuss their early experiences with race and racism.

As Obama points out in the trailer for the series (which you can watch below), on the surface, the pair have a lot of differences – but underneath, they also share a lot of similarities.

“On the surface Bruce and I don’t have a lot in common,” Obama says in a voiceover as pictures of the pair’s childhoods flash in the background. “He’s a white guy from a small town in Jersey, I’m a Black guy of mixed race born in Hawaii. He’s a rock’n’roll icon, I’m… not as cool.”

He continues: “In our own ways, Bruce and I have been on parallel journeys. Looking for a way to connect our own individual searches for meaning, truth, the community, with the larger story of America. And over the course of a few days, all just a few miles from where he grew up, we talked.

“What we discovered during these conversations was that we still share a fundamental belief in the American ideal. Not as an act of nostalgia, but as a compass, for the hard work that lies before us.”

Celebrity podcasts: 17 of the best series to listen to in 2020

Renegades: Born In The USA marks the second time the Obamas’ production company Higher Ground has worked on a podcast series for Spotify.

Last year, Michelle Obama released her own series The Michelle Obama Podcast, which saw her dive deep into conversations with her closest friends, family and colleagues (including Barack) about the different relationships which make us who we are.

With this in mind, we’re excited to see what Higher Ground’s second podcast series has in store because if it’s anything like the first, we’re in for a treat.

The first two episodes of Renegades: Born In The USA are available to stream on Spotify now.