Home » Entertainment » Behind the HYPE: How Topps Set the Standard for Modern Day Trading Cards

Behind the HYPE: How Topps Set the Standard for Modern Day Trading Cards 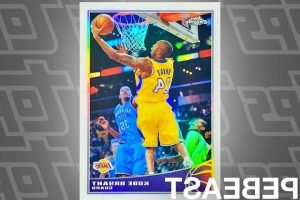 Topps is a prime example of the saying, “it’s not about who did it first, it’s about who did it right.” The earliest reported trading cards go all the way back to 1860 and were sold in sporting goods stores, then later were packaged with tobacco and cigarettes. Originally intended for adults, companies found that the cards were much more popular among kids, so they began selling them with chewing gum and candy rather than tobacco. In 1938, however, a game-changer would arise out of the pit of poachers in Topps. The company, which began as a Tobacco distribution business, switched gears to head into the bubblegum industry, and eventually trading cards.

For Topps to compete with the other trading card companies, it needed to stand out, so they created a line of magic photo cards that were included as freebies with bubblegum. In 1951, the brand then released its first series of baseball cards, which consisted of two separate sets — red bags and blue bags — with each having 52 cards that were designed for kids to play a card game. Topps would soon introduce its first annual collectors set, featuring 407 different cards released in six different series throughout the year. However, it was the packs of six cards that were sold with bubblegum for 5 cents that set the standard for the modern baseball card. Designed by Sy Berger, a Topps executive, these were the first to feature team logos and simulated player autographs, in addition to bios and statistics. Berger also began to sign star players to exclusive deals to be featured on his cards.

In the late nineties, card grading became popular among collectors, and this involved having a company evaluate the value of a card based on its rarity and condition — higher grades indicated a higher value card and so forth. Topps continued to innovate, releasing valuable cards that included pieces of jerseys, bats and fields and they collaborated with artists and athletes to create exclusive sets. In March 1996, a Chrome reflector Kobe Bryant rookie card sold for nearly $1.8 million USD. Yet, it was technology that truly helped launch Topps to a new stratosphere of popularity in the last ten years.

As childhood collectors have now reached adulthood, nostalgia has become a huge factor in collecting and therefore, Topps cards have became more of a commodity. Realizing this trend in 2020, Topps leaned into the collection craze, releasing new rookie heavy sets, vintage designs and releasing its very own magazine. Maintaining momentum into this year, Topps celebrated its 70th anniversary with the release of limited-edition baseball card collaborations called Project 70. Featuring stars like Snoop Dogg, Futura, Ben Baller and Mr. Cartoon, they each put its own spin on traditional baseball card designs. That’s not to say the OG releases don’t remain relevant. In fact, in January, a 1952 Mickey Mantle card sold for $5.2 million USD, setting a record for largest auctioned baseball card, a landmark moment for Topps, who reported profits were up 55% in just Q1 this year.

This era has already showcased limited edition moments captured onto cards like Bernie Sanders and Anthony Fauci cards, which set print run records for the company’s “Topps now” cards. They even released a collection of Garbage Pail Kids parody cards, which featured memes playing on the social and political moments of the year. Streaming and social media have also helped collectors connect on a new level. Card break streams and live-streamers garner thousands of viewers on YouTube and Twitch and this ability to connect over cards has ultimately driven sales higher, allowing companies like Topps to do more, like launching a series of NFTs this past April.

The NFTs featured star players with new and classic card designs, launching Topps into the new digital era. Topps trading cards have grown from a children’s pastimes to a massive collection industry, cementing the company as an iconic American brand, successfully pushing the limits on what trading cards can look like. In its 70 year existence, it’s clear Topps has set the standard for modern trading cards and continues to push the boundaries of what collecting will look like in the future.

Watch the full Behind the HYPE episode in the video above and head to Topps’ website to shop current collections.
Source: Read Full Article