So a screenwriter, a photographer, the district attorney of Clinton County, N.Y., and Ben Stiller drop by a small-town street corner together to see a manhole.

It sounds like the setup of a joke — and that was a problem. “I got that,” Stiller said recently. “‘Ben Stiller is going to come up and make a comedy about this and make fun of us.’”

His response to those assumptions that met his arrival two years ago in Dannemora, N.Y., arrives on Showtime on Nov. 18 in the form of a seven-part mini-series called “Escape at Dannemora.” The series is based on the real-life escape of two inmates from the maximum-security Clinton Correctional Facility in 2015 — they emerged from that same manhole — and the weekslong summer manhunt through the thick woods of upstate New York near the Canadian border. The series stars Benicio Del Toro and Paul Dano as the inmates and Patricia Arquette, almost unrecognizable after gaining 40 pounds and a brash upstate accent, as Joyce Mitchell, the prison employee who helped them get out.

All seven episodes were directed by Stiller, best known for his work in front of and behind the cameras in his own comedies, including the “Zoolander” films and “Tropic Thunder.” The tawdry elements of the prison break story, including Mitchell’s romantic entanglements with both inmates, would seem to lend themselves to a dark comedy.

Not to Stiller. On the contrary, he has delivered a gritty, intense drama that calls to mind the dark thrillers of the 1970s, a suspenseful addition to the prison genre that wears its deep research and attention to detail on its black-and-white-striped sleeve.

“I was curious how something like this really happens,” Stiller said in an interview in his office in Manhattan. “That sort of led to learning more about the prison dynamics and the whole ecosystem of the prison.”

Two screenwriters, Brett Johnson and Michael Tolkin, were working together on the series “Ray Donovan” when the inmates were discovered missing on June 6, 2015. They found the sensational details riveting: the inmates, David Sweat and Richard Matt, both convicted murderers, painstakingly sawed through their cell walls and a thick, wide steam pipe beneath the hulking prison and emerged from the nearby manhole. The hacksaws and other tools they used came from Mitchell, who initially planned to kill her husband and flee to Mexico with the convicts, but instead had a change of heart and a panic attack. 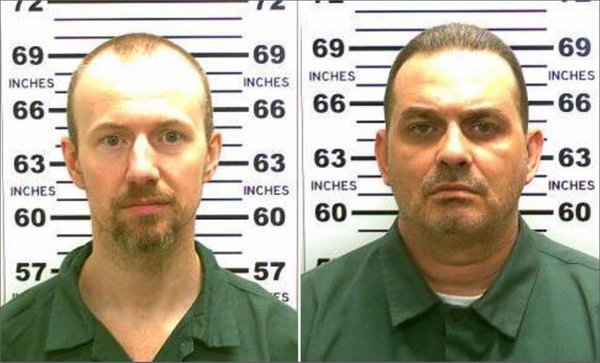 The writers began working on a script even as the manhunt dragged on that summer. Then, on June 26, officers found Matt outside a trailer in the woods and shot him dead. Sweat was captured two days later. Mitchell and a corrections officer, Gene Palmer, played by David Morse, were arrested and charged with aiding their escape.

The two writers brought a draft of a screenplay to Stiller, who had been in Italy filming “Zoolander 2” during the manhunt. “I asked them how much of it was real,” he said. Fifty percent, they answered. Stiller passed. “I don’t want to make something up,” he said.

Then a year later, the state Inspector General’s office released a 150-page report revealing the details of the events leading up to the escape and the lax oversight behind the prison walls that allowed the inmates to work on their plan for months unnoticed.

“It read like this novel,” Stiller said. The screenwriters found material and excerpts from interviews with those involved that were better than anything they could have made up. For example, Palmer, the officer, had recalled giving inmate Matt a package of ground beef in his cell, not knowing that Mitchell had hidden a blade inside. The gift itself was forbidden, but hardly uncommon in the quid-pro-quo relationship between jailer and jailed.

“I knew,” Palmer told investigators, “we were in a gray area with the meat.” That sentence became a sort of mantra behind the scenes of the show, Stiller said. Remember the gray area.

“The complacency that grew out of how old the place was,” Stiller said of the prison, which opened in the middle of the 19th century. “Generationally, it’s just been the same rules for years and years. A lot of corrections officers’ parents, their fathers worked there, their grandfathers.”

The director and writers studied transcripts from the interviews with Sweat and others. Stiller contacted Andrew J. Wylie, the district attorney of Clinton County, and they set up the meeting at the manhole. A photographer who was there offered to show Stiller the trailer in the woods were Matt was flushed out by officers, and the patch of grass where he was shot and killed.

“That really drew me in,” Stiller said, “It was so eerie, the trailer and that nook in the woods.” He filmed in the same trailer and recreated Matt’s final seconds in exactly the same spot of grass, even using police officers who were present that day in 2015.

Stiller and the cast, after receiving the blessing of Gov. Andrew M. Cuomo, visited Clinton Correctional and saw the cells and the catwalk used in the escape, which seemed to impress the staff. “They saw we were trying to tell the whole story,” Stiller said. “They talked about when rules were broken.”

The actors said visiting the prison was, as Dano put it, “worth, like, 10 books.”

“The second you step in there, the chill in the air, the smell, the sounds, seeing the inmates lined up in this strict regimen, the size of their cells,” he said.

The look of the prison informed the show’s style, Stiller said. “The reality of that place is it could be 1950, 1930. It could be 1990,” he said. “It reminded me of movies, growing up, that have always been the touchstones for me, which is movies from the ’70s.”

He cited “Dog Day Afternoon,” “Straight Time” and, most memorably for him, “The Taking of Pelham One Two Three,” in which his father, Jerry Stiller, played a police lieutenant.

“They were very real,” he said.

The screenwriters saw fresh material in a familiar genre.

“We watched every prison break movie ever made,” Johnson said. “Almost all those movies, the plot turns on logistics. When does the laundry come out? When does the shift change? When does the spotlight cross the yard?” But the involvement of Mitchell — everyone called her Tilly — made this story more universal. She is as trapped as the inmates.

In casting Mitchell, Stiller reached out to Arquette, his co-star in the 1996 comedy “Flirting With Disaster.” She had been fascinated by the news of the prison break and the woman at its center.

Arquette also sensed that the town of Dannemora, cold and remote, could put a strain on marriages like Mitchell’s. “There’s not as many distractions,” she said. “I think a lot of relationships go through a sort of drama because there’s not much to do.”

Arquette put on 40 pounds — “bread and pasta and sugar and beer” — and worked with a dialect coach to create the New York-Minnesota, nasally accent that she had observed in watching Mitchell in television interviews, including one with Matt Lauer on “Today.”

Stiller and the cast met with Sweat behind bars at a different prison. Dano said he was surprised by how forthcoming the inmate was about getting by in prison. “You can’t let your guard down,” he said. “You have to shut off parts of yourself and project something.”

Hours into the visit, Stiller sprang for a cheeseburger and Cherry Coke for the inmate from the prison vending machine. Sweat spoke of his relationship with his fellow inmate: Matt the charmer, engaging Mitchell’s help and tools, Sweat the engineer who made it work.

“Not friendship,” Dano said, “but friends-roommates-married couple, whatever that kind of dynamic is between people who need each other to get out.”

Del Toro thinks Matt was the kind of inmate who ends up “feeling more comfortable in jail,” and that maybe he always assumed he’d be captured.

The center of the plot, the escape itself, plays out in Sweat’s exhausting nightly labor with sledge and saw blade. His work is finally rewarded on screen with a tracking shot several minutes in length, the prisoner’s first solo run from cellblock cot to manhole.

Until then, “Escape at Dannemora” drills down on the daily grind inside the prison — the joyless sex scenes in a storeroom, the bickering among dangerous men in the cafeteria line, the office politics that govern even a prison tailor shop. The gray area with the meat.