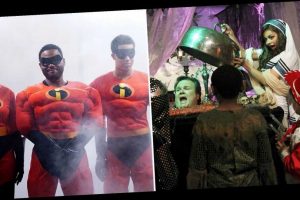 It’s spooky season! Fall is filled with traditions such as apple picking, carving pumpkins and sipping cider, but it’s also the perfect time to watch Halloween hijinks from our favorite shows.

Friends mastered the genre when it aired “The One With the Halloween Party” in 2001. The episode had the sitcom’s trademark jokes with the added fun of the group in costumes. Lisa Kudrow revealed during a Reddit AMA in 2014 that the story holds a special place in her heart.

“The Halloween party that Sean Penn appeared in,” she said at the time when asked about her favorite Friends episode. “For a lot of reasons. Number one was it was the first show we shot after 9/11. And that whole week, while driving in L.A., people would pull up, and give me a very sad look, and a quiet ‘Thank you’ for making them laugh.”

However, Friends director Kevin Bright told Metro in November 2018 that Penn was one of the sitcom’s more difficult celebrity guest stars.

“I think the least successful one was Sean Penn on the show,” he said at the time. “Just the style of the production wasn’t what he was used to, doing a show like that, so there was a little deer in the headlight effect.”

Boy Meets World‘s 1998 episode “And Then There Was Shawn” is another Halloween TV classic. Although the episode originally aired in February, it gained a cult following after airing in October for years after its premiere. The episode was an homage to the teen slasher film genre, which were wildly popular in the late ’90s due to films such as Scream (1996). Jennifer Love Hewitt also made a cameo appearance in the episode after skyrocketing to stardom in I Know What You Did Last Summer (1997).

The episode’s director, Jeff McCracken, told Yahoo TV in October 2016 that she landed on the show because of her relationship with Will Friedle.

“That came about because Will was dating Jennifer at the time,” McCracken, 68, said. “So we told him, ‘Will, we’d love to have Jennifer on the show.’ It all worked out, Jennifer was a doll and she loved doing it. They broke up soon thereafter, but it was perfect timing for us. I hope the show wasn’t the thing that did it!”

Scroll down for some of the best Halloween episodes to watch this season.

END_OF_DOCUMENT_TOKEN_TO_BE_REPLACED

END_OF_DOCUMENT_TOKEN_TO_BE_REPLACED
We and our partners use cookies on this site to improve our service, perform analytics, personalize advertising, measure advertising performance, and remember website preferences.Ok