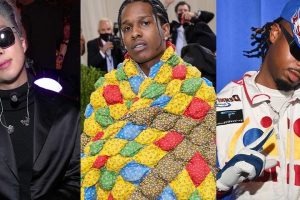 As the week in music comes to a close, HYPEBEAST has rounded up the best projects for the latest installment of Best New Tracks.

This week’s lineup is led by Metro Boomin, RM and A$AP Rocky, who each released the albums Heroes and Villains and Indigo and the single “Shittin’ Me.” Also joining this selection are offerings from YSL’s Yung Kayo, RINI, Saucy Santana, MIKE with Sister Nancy, Louis The Child, Wallice and Pheelz.

Metro Boomin delivers his sophomore studio effort Heroes and Villains, a brilliant and star-studded affair featuring the likes of Travis Scott, 21 Savage, Future and more. The 15-track project serves as the producer’s first solo full-length album since 2018’s Not All Heroes Wear Capes, which went on to debut at No. 1.

The debut studio album of RM is finally here. Indigo features high-profile guest appearances from the likes of Erykah Badu and Anderson .Paak and has been in the works for four years, with the BTS leader telling Pharrell in their Rolling Stone cover story that stepping away from the group helped him really focus on his Mono followup. “That’s how I got to concentrate on my solo [album]. These days I really have been thinking about when I first listened to you, the first feeling and the vibe, and the reason why I started, why I chose music for my whole life, I guess,” he shares.

After several years of teasing, A$AP Rocky officially releases his track “Shittin’ Me.” The Kelvin Krash-produced cut fronts the Need for Speed Unbound soundtrack and has been a fan favorite for around four years, with Flacko himself performing the song live on several big occasions such as Camp Flog Gnaw 2018.

New Gen: Spring 2022 honoree Wallice shares a fond reminder about the importance of family in her latest song, “Japan.” The ballad arrives with an accompanying music video a Japanese version that hears the LA-based artist sing in Japanese, revealing in a statement, “My father was born and raised in Tokyo and lived there until he was 27, and my mother lived there for a couple years in the 90s, so Japanese culture has heavily influenced my identity. I don’t know my father’s family in Japan at all. I’ve only met them once when I was little at my grandfather’s funeral, and since then my grandmother has passed. Recently my mother moved across the country from California to Georgia which has left me without that familial sense of home. This song explores where home is and why I am so drawn to Japan.”

DC rapper Yung Kayo celebrates his birthday with his aptly-titled EP, nineteen. The seven-record project is a testament to his ever-evolving sound, with his signature rap-yelling tune laid on top of exciting hyperpop beats. The youngest member of Young Stoner Life makes an exciting case for himself with the EP, leaving fans wanting more.

Saucy Santana continues to deliver a magnificent 2022 run with “Bop Bop.” The rapper’s lively, bass-heavy cut is instantly fun and distinctly Santana’s, and follows his run of hits like “Booty,” “I’m Too Much” and the remix of “Material Girl” with Madonna.

Louis The Child delivers their newest 17-track project, Black Marble. Speaking on the instrumental tape, the duo shares, “For our 3rd beat tape we set out to do something that felt completely different from the first two. We’re always making different styles of music, and after a little while we noticed we had a lot of songs that felt darker and girttier than the rest of the music we were putting out. It became clear to us that this was going to be the direction of the next beat tape. We pushed ourselves to create a project that was a step up from Candy 2 both sonically and visually. The film takes place in 9 different cities around the world and features dancers of various styles performing throughout each city. One of our favorite parts of creating the project was doing viewings of the film at warehouse venues in NYC, LA and Chicago. After each viewing we would go back and make adjustments to the film and music based off the reactions we got and how we felt seeing the movie on a big screen with a big soundsystem. We hope you enjoy the project[.]”

MIKE and Sister Nancy join forces for “Stop Worry!” which drops on the former’s late mother’s birthday. The track is set to appear on MIKE’s upcoming album Beware of the Monkey releasing on December 21 via his 10k label.

RINI shares his highly-anticipated EP, Ultraviolet. The seven-track project arrives just as the R&B artist kicks off his headlining US tour, which is set to conclude on December 16 in Los Angeles.

Breakout Nigerian artist and award-winning producer Pheelz delivers his new single “Ballin.” Stacked with laidback percussion, the cut allows the multi-instrumentalist to flex his vocal range on the two-and-a-half-minute track.