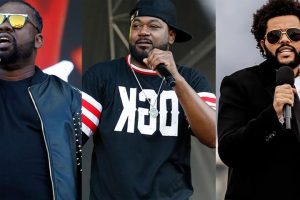 As the week in music comes to a close, HYPEBEAST has rounded up the 10 best projects for the latest installment of Best New Tracks.

This week’s list is led by The Weeknd‘s accompanying music video for “Die For You,” a visual he released to celebrate five years of STARBOY, and the collaborative effort between Wu-Tang staples Ghostface Killah and Raekwon entitled “Bob James Freestyle.” Also joining this selection are offerings from Remedy, Chief Keef, namesbliss and Giggs x Rowdy Rebel.

The Weeknd is celebrating the fifth anniversary of STARBOY with a visual for “Die For You.” The Christian Breslauer-directed music video pays homage to Stranger Things and E.T., and features a young boy with telekinetic powers trying to outrun the authorities. The XO Records head also dropped a collaborative collection with Seventh Heaven to commemorate the record.

Wu-Tang Clan staples Ghostface Killah and Raekwon reunite for the collab track “Bob James Freestyle,” which arrives in the midst of their joint 3 Chambers Tour with GZA. Ghostface Killah is also set to work on Supreme Clientele 2, which will be executive produced by Kanye West and Mike Dean.

After reportedly leaking more than a year ago, Chief Keef finally decided to formally release “Tony Montana Flow” on streaming services. The cut marks his third single this 2021, following “New Bugatti” with Lil Gnar and Ski Mask the Slump God featuring DJ Scheme “Hadouken,” but a followup to Dedication — his last full-length album in 2017 — is yet to be released.

South London and New York collide on Giggs and Rowdy Rebel’s “Differences.” Produced by JordanProdIt and Ellis Lost, the three-and-a-half-minute track follows the British rapper’s appearances on the Godfather of Harlem soundtrack and collabs with the likes of Ghetts, RAY BLK and more. HAPPY THANKSGIVING TO ALL MY STATESIDE FAMILY,” he wrote on Instagram.

Long time Wu-Tang Clan affiliate Remedy reunites with the group on his latest project, Remedy Meets Wu-Tang. The 14-track effort features appearances from the likes of Ghostface Killah, RZA, Method Man, INS Deck, Cappadonna, Masta Killa, Shyheim, Killah Priest and Conway The Machine. “It’s been a long and amazing journey with my Wu-Tang family, and it just keeps getting better. This album represents a legacy and will hopefully touch souls all over the universe” Remedy said in a statement.

Rising Enfield star namesbliss finally delivers his awaited project, Light of Mine. Clocking in at approximately 20 minutes, the seven-track EP features previous singles “Strikers,” “Rubicon Lychee” with Vagrant Real Estate, “Paperchase” with ZCBeats and “Guide Me” with Eyez and Darah.