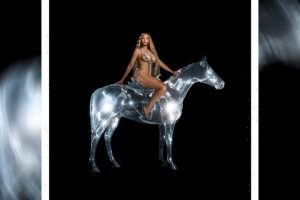 One month ahead of its release, Beyoncé has pulled back the curtain on the official cover art for her forthcoming album, Renaissance.

Marking Queen B’s solo return in regal fashion, the emblematic image, captured by Carlijn Jacobs, sees Bey seated atop a crystal horse wearing a glittering, spike-covered bodysuit. The record, which Beyoncé has teased as Act I: Renaissance, hinting at additional music down the line, will follow her last solo album, Lemonade, which was released in 2016.

In a note alongside the artwork, Beyoncé detailed her intentions with the upcoming record. “Creating this album allowed me a place to dream and to find escape during a scary time for the world,” she wrote. “It allowed me to feel free and adventurous in a time when little else was moving.”

“My intention was to create a safe place, a place without judgment,” she added. “A place to be free of perfectionism and overthinking. A place to scream, release, feel freedom. It was a beautiful journey of exploration. I hope you find joy in this music. I hope it inspires you to release the wiggle. Ha! And to feel as unique, strong, and sexy as you are.”

Earlier this month, Bey dropped off the upbeat lead single from the album, titled “Break My Soul,” which features production from Tricky Stewart and Terius Nash. The chart-topper has not yet revealed a tracklist for the record.

Renaissance is slated for release on July 29. Revel in the official album artwork above.

Elsewhere in music, a video of Frank Ocean singing at his high school graduation has surfaced.
Source: Read Full Article