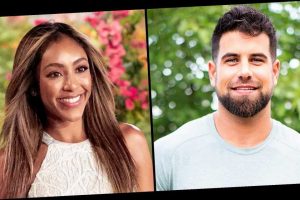 If you ask Blake Moynes, his relationship with Bachelorette Tayshia Adams may have ended differently if Clare Crawley wasn’t the original season 16 lead.

“The connection [I had with Tayshia] was very slow. But every time that we’d make a step, I think I opened her eyes more and more and more,” the 29-year-old Canadian told Us Weekly exclusively after he was eliminated on the Monday, December 14, episode. “And I think you saw that a couple of times, like, ‘Every time I talk to Blake, he shows a different side of him.’ And that’s what happened. I think she had her guard up just like she said at the Men Tell All, I walked in with a red flag over my head [because I had feelings for Clare Crawley too].”

Clare, 39, fell in love with Dale Moss within the first two weeks of filming season 16 of the series at La Quinta Resort in Palm Springs. After he proposed, ABC brought in Tayshia, 30, to take over with Clare’s remaining 16 suitors and four new contestants.

“If it was Tayshia from the beginning, I think my story would have been a little bit different. It was tough because I felt, like, even emotionally, I could feel it, like, she could see something there,” Blake told Us. “And it was so frustrating to get in the limo and be like, ‘There’s something here but you’re just not letting it happen.’ And that was the most unfortunate.”

Blake was eliminated after his first one-on-one with Tayshia on Monday’s episode as she prepared to pick her final four ahead of the hometown dates.

“Right when I first got back [home], I was frustrated because it sucks. The connection that we had came on, like, the last day I was there. So, it was so fresh,” Blake told Us. “I felt like we made such a stride. And it was, like, shut down. But I still was hanging on to that day just because we blamed it on time. I wish she just said, ‘You’re not The One for me. There’s other connections here. I don’t see us being a thing.’ Instead, it was like, ‘We ran out of time, the connection came too late.’ And so yeah, I got sent home. And I was like, thinking about the what-ifs, the potential.”

Blake added that he kept the “little gifts” from their dates, including the crystals from their one-on-one and a bucket list he made for her that fans didn’t see.

“Now I put them and tuck them away because I just don’t want to think about it anymore. But, yeah, you just naturally think about the what-ifs and you’re always going to until you get closure,” he said. “And I know that’s why I asked the questions I kind of did at the Men Tell All and I wanted her to kind of give me the answer of, ‘You’re not The One for me, it wasn’t just time.’ I didn’t really fully get that. But, you know, I’ve moved past it now. I think she’s happy where she’s at and, you know, things play out the way they should and I believe in that.”

END_OF_DOCUMENT_TOKEN_TO_BE_REPLACED

END_OF_DOCUMENT_TOKEN_TO_BE_REPLACED
We and our partners use cookies on this site to improve our service, perform analytics, personalize advertising, measure advertising performance, and remember website preferences.Ok