Blake Shelton Jokes Adam Levine Was 'Fired' From 'The Voice' 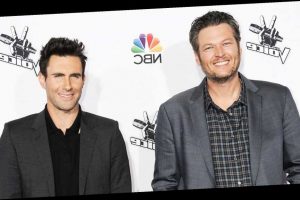 Shots fired! Blake Shelton joked that Adam Levine was cut from The Voice because of Kelly Clarkson during the Monday, March 22, episode.

After contestant Keegan Ferrell performed Maroon 5’s “She Will Be Loved,” both Shelton, 44, and Clarkson, 38, turned around, hoping Ferrell, 22, would be joining the competition.

The “God’s Country” singer noted that he “happens to be buddies with the guy who wrote and sang that song,” despite Levine, 42, not being on the show anymore.

“I want you to look for just a second at this coaching panel. Take note of who’s missing — and who’s in that chair,” the country star joked. “Now, I’m not saying Kelly Clarkson got Adam fired, but he’s gone, and she’s sitting there, OK? This network stands for ‘Nothing But Clarkson.’ If Maroon 5 inspires you, I don’t know if I would choose a coach that is their arch-nemesis.”

‘The Voice’ Coaches Through the Years: Who Left and Why

The “Because of You” singer quickly responded that she and Maroon 5 toured together, but Shelton was ready with a deadpan response. “And then you got him fired,” the Grammy nominee said. “I’m willing to get fired for you, Keegan!”

Ultimately, the move worked, and Ferrell went with Shelton, later telling the cameras, “He just knows how to bring artists to the next level!”

Levine, for his part, left the show in 2019 after 16 seasons of coaching alongside Shelton. He later explained that he wanted to spend more time with wife Behati Prinsloo and daughters Dusty, 4, and Gio, 3.

‘The Voice’ Winners Through the Years: Where Are They Now?

“[I’m] able to stop in this moment to [be] with my new, young family and have the greatest time ever,” he told Ellen DeGeneres months after his exit. “Now I’m just a stay-at-home dad. I just stay at home and do very little. It’s great. … [I’m] obsessed. I know that’s a good thing because they’re my children, but that’s why I don’t do much because I love hanging out. I genuinely just adore them in a way I never knew I could adore any little human.”