Boba Fett’s Message On ‘The Mandalorian’ Has Apparently Been Decoded 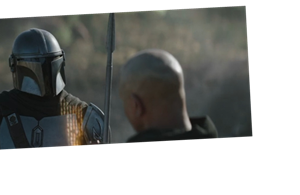 Even in a galaxy far, far away, they still have 23andMe. Or something.

Though Gus Fring himself, Giancarlo Esposito’s Moff Gideon, captured Baby Yoda-Grogu in the latest episode of “The Mandalorian,” putting him in the ittiest-bittiest handcuffs, fans still had something to cheer for:

The Mandalorian (Pedro Pascal), of course, acquired Fett’s former armor in the Season 2 premiere. In the latest episode, in order to convince Mando that the armor belongs with him, Fett showed a chain code that had been embedded in it.

Mando immediately got the message, but for everyone else, it might be a little more difficult.

The message was encoded in the armor for 25 years, and it took “Star Wars” fans about 25 seconds to decode it:

Fans were quick to attempt to translate the message, said to be written in the Mandalorian language Mando’a, and promptly posted it on Reddit and Twitter.

According to these translations (which you can see above), the message recounts Fett’s lineage, pointing out Boba’s father Jango Fett was a foundling and mentioning Jango’s home planet Concord Dawn.

The message also apparently includes a reference to “Mentor Jaste,” which fans are taking to mean Jaster Mereel.

In past now-noncanon “Star Wars” stories, Mereel was Jango’s mentor-father figure, who he fought alongside in the Mandalorian Civil Wars. If the message does include Jaster Mereel, it seems to be bringing at least some of Jango’s history into the new “Star Wars” canon.

With the conversation between Mando and Boba Fett about his father, being a foundling and fighting in the Mandalorian wars, the translations seem to make sense. And once again, there’s no Force stronger than the “Star Wars” fandom.

END_OF_DOCUMENT_TOKEN_TO_BE_REPLACED

END_OF_DOCUMENT_TOKEN_TO_BE_REPLACED
We and our partners use cookies on this site to improve our service, perform analytics, personalize advertising, measure advertising performance, and remember website preferences.Ok