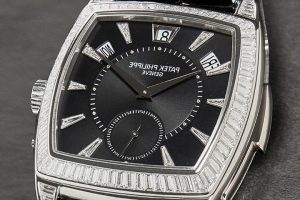 Bonhams Hong Kong will be offering up one of the rarest minute repeaters produced by Patek Philippe in modern times at its watch sale later this month.

The Patek Philippe Ref. 5033P launched in 2002 and was the first watch to combine minute repeater with annual calendar, a complication Patek invented in 1996.

The model, which was cased exclusively in platinum, except for a single titanium example [which sold last year for $1.9m USD], was updated in 2004 to replace its original Roman numeral hour markers with drop hour markers. Most of the total production run, thought to number around 80 pieces, used a white or “silvered” dial.

Known as a “Cathedral” minute repeater, referring to its extra gong and the resulting fuller sound, the Ref. 5033P features a R27 PS QA comprising of 483 components

Also for sale is an original Audemars Piguet stainless steel 5402ST “Royal Oak Jumbo” from 1972, the year the iconic Gerald Genta design changed the way people looked at watches forever. This piece is one of the earliest known Series B steel examples known of and is accompanied by box and papers. It comes with an estimate of $83,700 USD – $129,000 USD.

Omega is also represented by a 67-year-old yellow gold Seamaster Ref. OT 2520 with cloisonné enamel dial depicting Neptune, which is pretty fitting for a Seamaster.

Enamel should, in theory, never age behind a watch glass, but the material is so fragile it is prone to cracking from impacts or improper fitting. The cloisonné technique of dividing up an image into sections using fine gold wire only adds another potential point of failure, so examples such as this 1954 watch surviving intact are rare. Bonhams has attached an estimate of $97,000 USD – $155,000 USD.