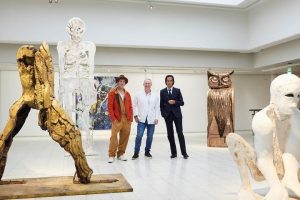 There aren’t many firsts for Brad Pitt anymore in the film industry, but the acclaimed American actor can now add artist to his list of achievements. Over the weekend, Pitt debuted a series of sculptures alongside work by renowned British artist Thomas Houseago and musician Nick Cave.

On view at Sara Hildén Art Museum in Tampere Finland, the exhibition centers around Houseago’s ambitious new project WE, which aims to recontexualize the concept of authorship by challenging the idea of the artist as a solitary individual. Both Cave and Pitt are well admired in their respective fields, but this is the first time that either have exhibited their artwork, which were created in conjunction with Houseago.

“WE delivers a strong message of working together, creating something new and a sense of community that is compatible with Tampere, as the city is known for its capacity for change and making bold decisions together. The message of doing together and relying on each other is very powerful in these turbulent times,” said Tampere mayor, Anna-Kaisa Ikonen.

Pitt created nine artworks for the show, including a molded plaster panel depicting a narrative gunfight, along with a large bronze coffin-shaped sculpture and smaller works, such as House A Go Go (2017), which was made using blocks of timber.

Cave worked with Corin Johnson to create 17 glazed ceramic sculptures that depict the life of the Devil. According to a release by the museum, “the series nods to the artist’s interest in Victorian Staffordshire Flatback figurines, of which he is a collector.”

Playing into the concept of WE, Houseago presents Vision Painting II – Soul Visit – Dead Self & Before Birth (2020) and Psychedelic Construction Masks (2020). Each artwork aims to deconstruct the ego that is often attributed to creativity, while simultaneously showing the artist’s own journey of discovery through both the psychological interior and physical exterior.

Thomas Houseago—WE with Nick Cave and Brad Pitt will be on view at the Sara Hildén Art Museum in Tampere, Finland until January 15, 2023.

In case you missed it, Robert Pattinson is the latest guest curator for Sotheby’s “Contemporary Curated” sale.