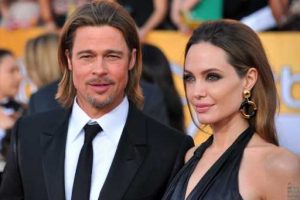 To say that Angelina Jolie and Brad Pitt’s divorce has been contentious might be underestimating how vicious things are between the two of them. The 47-year-old actress and her legal team were reportedly hoping to serve her ex-husband in a very public forum in the battle over their Château Miraval winery.

Pitt was almost subpoenaed by a process server on the 2022 SAG Awards red carpet in February, “in hopes of catching him off guard,” according to a Page Six source. While it didn’t happen at that awards show because he didn’t attend the event, there were back-up plans to do it on Oscars night. Pitt is lucky that his lawyers “called off the chase” and made sure he was served after a few months of being hard to locate.

The 58-year-old Oscar winner avoided the public humiliation, but Olivia Wilde wasn’t so lucky. She was handed child custody papers from her ex-fiancé Jason Sudeikis while she was on stage at CinemaCon in Las Vegas, presenting her upcoming film, Don’t Worry Darling, in front of a huge crowd of entertainment industry professionals. Her speech was interrupted by a female process serve,r who handed over legal documents in a manilla envelope marked “Personal and Confidential.” Wilde reportedly asked, via People, “This is for me?” and then shared that she was “going to open it now because it feels like it’s a script.” While Sudeikis swore he had “had no prior knowledge” that Wilde was going to be served in a public venue, the damage was done and caught on-camera.

The Pitt vs. Jolie battle isn’t over yet and the couple is still arguing in court over the sale of her portion of the French winery. She sold 50% of the winery to a Russian oligarch while Pitt is arguing that he should have been offered first right of refusal. The war of the roses goes on, but Pitt was spared a red-carpet legal maneuver.

Before you go, click here to see the longest celebrity divorces that took years to get finalized.