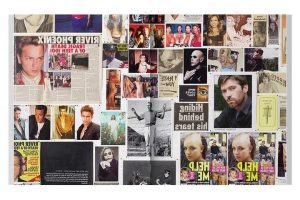 Brendan Donnelly is a collector of things. Prints, news clippings and various ephemera that he has accumulated over a 30-year span, which he uses to create provocative reflections of celebrity culture. His multi-disciplinary practice often floats from writing to painting to performance and back again — always carrying a penchant of humor as he creates between the worlds of fine art and lowbrow culture.

Published by Hat & Beard Press, the Los Angeles-based artist has released his first book, titled I Wanted to be an Actor, but I Could Never Remember My Lines. Donnelly presents a rich assortment of celebrity memorabilia that he has collected from movie stores, head shops, souvenir shops, newsstands, adult video stores, and bookstores on Hollywood Boulevard.

Each spread oscillates between slapstick humor and sobering truths that reveal the often tragic underbelly of Hollywood culture and the nature of celebrity. I Wanted to be an Actor, but I Could Never Remember My Lines spans 192 pages and is available to purchase for $40 USD at Hat & Beard Press.