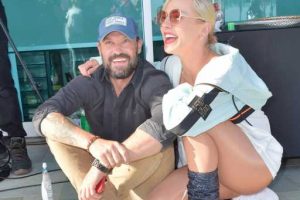 Brian Austin Green and Sharna Burgess seemed to have a blissful summer filled with a trip to Disney World, shark diving in Guadalupe and spending time with his sons with ex-wife Megan Fox. With everything moving in the right direction in their relationship, a curious post by Burgess sparked engagement rumors that had her followers wondering if the duo is taking their love to the next level.

In a dreamy black-and-white photo, the Dancing with the Stars pro is seen kissing a scruffy Green against a beautiful waterfront backdrop. She captioned the image, “END GAME 🖤” and that sent her fans into a frenzy wondering if this was moments after a proposal. And it’s not an out-of-the-question thought since the two have been quite serious about their relationship since they were first spotted together in December.

While neither of them has mentioned an engagement, there is one project that TMZ is confirming they will be working on together this fall — Dancing with the Stars. Reportedly, Green will be donning those dance shoes and taking a spin around the ballroom for the 30th season. His partner hasn’t been announced yet, but it has to be Burgess, right? Who else would they pair him up with?

No matter what happens on the TV show, the couple appears to be on solid ground with Burgess calling her boyfriend, her “favorite human,” on his birthday in July. “I truly never knew it could be like this. That my happiness could find a whole new level,” she wrote. “That life and love and all things in between could feel so inexplicably deep and connected and transparent and …. Right.”

Engaged or not, Green and Burgess are living in a happy bubble of love.