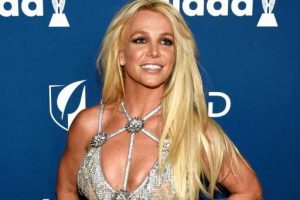 In case you haven’t noticed, Britney Spears has a whole new lease on life. The beloved pop star has been enjoying her newfound independence ever since her conservatorship finally came to an end in November after roughly 13 years. Since then, Spears has shared with her fans just how much she’s been loving her freedom, and her latest Instagram post is no different. The “Toxic” hitmaker took to social media and shared a carousel post of naked beach vacation photos, and it seems like she’s seriously living her best life.

The Instagram post, which was shared yesterday, featured Spears in a series of poses. The entertainer basked in the sunshine while laying on the sand, letting the crystal clear water wash all over her bare skin. In order to cover certain parts of her body, Spears used little diamond emojis. And in place of a caption, she simply added a series of red rose emojis.

Fans simply fawned over the photos, and showed Spears nothing but love. Of course, sharing photos like the ones above isn’t anything new for Spears. A number of the posts Spears has shared since her conservatorship ended have featured the singer baring it all and taking control, ownership, and agency over her body. After years of feeling exploited by those around her, it’s honestly so refreshing to see Britney taking control of her narrative.

On that front, longtime fans and supporters of the superstar have even more to look forward to. Recently, Spears reportedly inked a $15 million deal to share her story after years of being under the immense pressure of her conservatorship. While we’re looking forward to reading what Spears has to say about that time period in her life, we also hope it offers her another opportunity to heal. Until then, we love seeing Spears feeling freer than ever and embracing this new chapter in her life.

Before you go, click here to see which other stars got naked on camera.