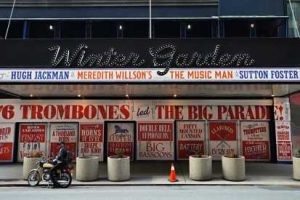 Federal regulators have cited the Shubert Organization for four serious workplace safety violations and proposed a fine of $45,642 in connection with the death of an employee who fell from a ladder while working at the Winter Garden Theater last fall.

The citations, from the Occupational Safety and Health Administration, were issued on May 11, six months after Peter Wright, a 54-year-old stagehand, fell nearly 50 feet from a narrow, raised platform while performing routine maintenance in the theater.

OSHA issues these serious citations when, according to its review, lapses have led to hazards carrying a “substantial probability that death or serious physical harm could result.” In the Shubert Organization’s case, OSHA did not find that the violations were willful ones, in which an employer “intentionally and knowingly” violates the law.

The Shubert Organization has set up a meeting to discuss the citations and penalties, James C. Lally, a spokesman for the U.S. Department of Labor, said. If the two parties do not reach a settlement, the company can still contest the citations, Mr. Lally said. Otherwise, they will be obligated to pay the full amount.

A spokesman for the Shubert Organization declined a request for comment, citing the ongoing investigation.

The violations issued to the group, which is the largest landlord on Broadway, included having a wooden ladder coated with a material that could obscure structural defects and two instances of a ladder used for a purpose for which it was not designed.

Mr. Wright, who was from Milford, Conn., was a stagehand for Local 1 of the International Alliance of Theatrical Stage Employees, the labor union that represents professional stage employees in New York, for 34 years. He and his wife of 23 years, Marcie Lowy Wright, met when they were both working as stagehands for a 1990s “Grease” revival at the Eugene O’Neill Theater.

James J. Claffey Jr., the president of Local 1, wrote in a tribute in November that Mr. Wright “had a work ethic that was nothing short of exemplary, was extremely talented and skilled in his craft, and he was one of the finest riggers/flyman in our industry.”

The last show to play at the Winter Garden Theater had been “Beetlejuice,” which had been set to end its run on June 6, 2020, before the theater, like all on Broadway, shut on March 12 because of the pandemic; “Beetlejuice” was not slated to return.

A revival of “The Music Man” that will star Hugh Jackman and Sutton Foster is set to begin performances in December and open next February.

Bill Evans, a spokesman for the Shubert Organization, said at the time of Mr. Wright’s death that most stagehands had not been working at the organization’s other theaters during the pandemic shutdown.

“We mourn the loss of our valued colleague,” he said in a statement. “Our heartfelt condolences go out to the family during this difficult time.”

Dylan Foley, who was a friend and co-worker of Mr. Wright’s, wrote in a Facebook tribute in November that Mr. Wright was “completely fearless in how he lived his life as a stagehand” and often did the work of three men.

“He had a dry wit, an unstoppable work ethic, and a trademarked grin,” Mr. Foley wrote. “If you asked for something from Pete, his line was, ‘For you, the grid’s the limit.’”