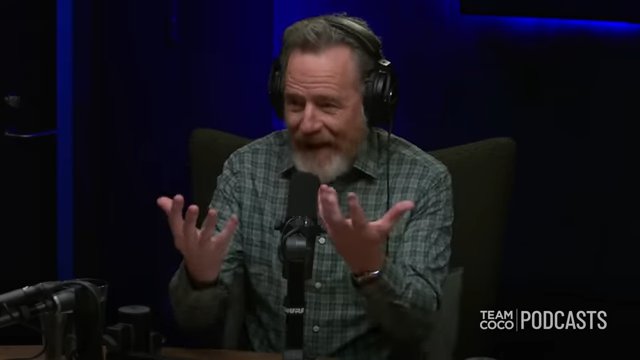 Breaking Bad’s Bryan Cranston has revealed he lost his virginity to a sex worker in Austria when he was just 16 years old.

The 66-year-old has told the full story of how he lost his virginity in the 1970s while travelling around Europe with two older friends.

While his companions were keen on the idea, Bryan recalled how he ‘got cold feet’ in the Austrian brothel, before a woman of an unknown age came up to him and took his hand.

What ensued was, as Bryan put it, a ‘traumatic and a great, exhilarating, memorable experience’.

‘It was the thing to do,’ he said in an interview on the latest episode of the podcast Conan O’Brien Needs A Friend.

‘I was actually looking forward to it’ the actor scoffed. ‘And nervous as hell, of course – I was 16.

Bryan described how they arrived in the red light district of Salzburg, and while his two other friends – who were about a year-and-a-half his senior – entered a brothel, he hung back and said: ‘I don’t think I brought enough money.’

The actor laughed at this, and joked: ‘I don’t think I have enough Austrian Franks to be able to make this transaction.’

His two friends both made their ‘deals’ and ‘went upstairs’, while he ‘tried to indicate’ with gestures that he didn’t have enough money.

The Malcolm In The Middle star continued: ‘I sat down in the foyer, and then this woman came up to me, and – everyone’s older than you when you’re 16, I could not tell you how old she was – she came up and she indicated to my pockets.’

Bryan then again indicated that he didn’t have enough money, and pulled out a few coins to show her as much, before she ‘grabbed the money and she grabbed [his] hands’.

The unnamed woman pointed at Bryan’s clothes in a flippant sort of way, to which podcast host Conan remarked his penis would ‘be up inside my body at this point, it would have retracted into my left lung’.

‘So then, yeah, I had to stand up while taking my clothes off and putting it on a hook,’ remembered Bryan.

‘I was so nervous that I didn’t even feel anything. My brain was on fire.’

At one point, the actor thought ‘I should touch her breast’, and when he did the woman slapped his hand away.

‘It was like, “Which one should I touch? I don’t know,” and so I just touched one of her breasts and all of a sudden I just felt her hand slap mine,’ he said.

Bryan then joked how afterward he played it cool with his friends and was basically ‘smoking my imaginary cigarette’.

In what was generally a light-hearted retelling of the event, Bryan concluded that losing your virginity is a ‘seminal moment in a person’s life’.

‘I’ve been going back to Austria ever since,’ he quipped.

Conan, perplexed at the star’s honesty and generosity for opening up so candidly about this experience, joked that he didn’t even ask for the story, but Bryan just told it anyway. Fair play!