Bryan Cranston Wants More of Us to Get ‘Mad as Hell’

As Howard Beale, the mad prophet of the airwaves in Broadway’s “Network,” Bryan Cranston spends eight shows a week inveighing against “the depression, and the inflation and the defense budget and crime in the street … and the Russians,” urging his viewers to get as livid as he is and threatening to blow his brains out on live TV. Even when measured against Mr. Cranston’s previous work on “Breaking Bad” and “All the Way,” that’s a lot of rage that the actor has had to channel on a regular basis (dating back to the play’s original run last year at London’s National Theater).

Here, Mr. Cranston talks about how he approaches the Beale character and what “Network” (which opens Dec. 6 at the Belasco Theater) has taught him about anger, aging and cable TV news. These are edited excerpts from the conversation.

Howard Beale is an iconic film character, and Peter Finch’s portrayal of him in the movie is pretty much impossible to ignore. How do you prepare for a role like this?
When I was doing L.B.J. [in “All the Way”], I spent a lot of time at the [presidential] library in Austin. Everybody would say, what are you looking for? And my answer is always, I don’t know. Creating a character is like a big funnel. You just keep putting things in and it shakes down. When I did [“Network”] in London, I was really hyper-focused on it and very monastic in my lifestyle. What I love about [the director] Ivo [van Hove] is that he likes the experimentation throughout. It’s not to disregard the hours that a writer has put in. But it’s a living, breathing thing. And sometimes — ooh, if I invert these two words, it lands better. So that’ll happen and I’ll just say, what do you think?

I’m not sure how Paddy Chayefsky would have felt about that.
And I respect that. But the idea of a writer in a room with his typewriter — Paddy writing this up and saying, “It will be done exactly as I wrote it” — it works in his head. But he’s not in the actor’s head. He’s not performing it.

Did you see “Network” when it was originally released?
I was in college when it came out, and it was impactful, brazen — shocking in many cases. I grew up with Harry Reasoner and Walter Cronkite. P people that seemed very authoritative, and it never occurred to me that they were packaging information. I just thought: This is what happened. No agenda. No point of view. That’s what we trusted. 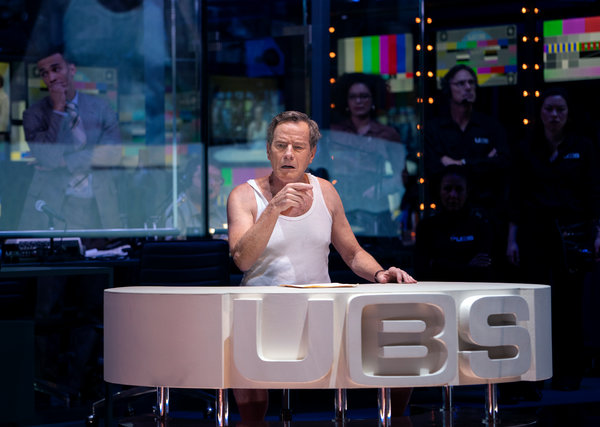 Does it mean something different to you now?
That’s what so prescient about [Chayefsky’s] work. We’re seeing it now, very clearly: agendas of different outlets, to promulgate their ideology. Whether it’s liberal or conservative. It doesn’t matter, it’s out there. And you listen to the people who agree with you for affirmation, and you listen to the other side so you can get angry and shout at them. Our society does not welcome the emotion of anger. It is not appropriate. And working on this made me realize: Why not? It’s a great motivator. It’s legitimate. Why is that not embraced as who we are?

You don’t think the film is warning that, when we let our anger out of its box, it’s almost impossible to put it back?
Should there be a box, though? Sometimes, anger is the absolute correct emotion to emote. It’s appropriate. Perhaps it’s necessary, right now, in our society, where there’s so much division and rancor. Why not open up the escape valve so that — psssssssshhhh — it can go out? I think people would feel better.

When I think back to your earliest breakthroughs as a TV actor, and the nice guys you were known for, I would never have imagined you’d end up playing Howard Beale.
Well, 15 years ago, when I was on “Malcolm in the Middle,” I wouldn’t have been able to play Howard Beale. I needed the age. I needed the added wrinkles in my face, the gray at the temples, so the audience feels the weight of a career that’s come to an end. I happened to be struck by lightning with “Breaking Bad.” I make no bones about it.

Do you have a routine for getting into and out of character?
My ritual is to get to the theater early, sit with it. I have nine or 10 ties that I wear, and I tie my own ties. I put on his clothes and the more I do that, the closer I get to inviting him in. I slowly allow him to live. I welcome him to the surface, and when it’s done, I ask that he leave.

Has doing this show made you more skeptical of the news media?
If you’re not skeptical, you’re naïve. If you believe everything that you see on CNN or Fox or MSNBC, you are gullible. You can’t just go to one source. Because now the news is a news-entertainment program.

“Network” is always reminding us that Beale is washed up, personally and professionally. I doubt anyone would say that of you. Can you connect to that part of the character?
Howard Beale is my age. He is ready for retirement. I’m fortunately in a career where I don’t have to think about that. In the back of my mind, there is a thought: My mother died of Alzheimer’s, and I was with her. I saw the descent of a human being. And if I get to the point where I can’t retain the lines and my memorization is weak, you’re not going to see me do anything where there’s notes on the stage or I’ve got to get the next line — no, no, no. I’ll just retire and go away.