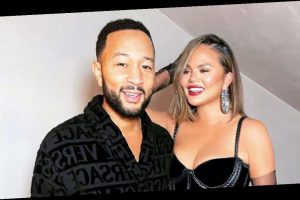 Putting him on blast! Chrissy Teigen made her dislike for husband John Legend’s 2021 Grammys acceptance speech loud and clear after he failed to thank her.

See What the Stars Wore on the 2021 Grammys Red Carpet

Ahead of the 63rd annual ceremony on Sunday, March 14, the “All of Me” crooner, 42, won within the best R&B album category for Bigger Love. Accordingly, the 35-year-old Cravings creator gushed over her love’s milestone — marking his 12th career win after receiving a whopping 33 nominations over the years.

“John, you just won R&B album of the year,” Teigen, who was in a bathrobe while at home with Legend, said in her Instagram Stories video. “How are you going to celebrate?”

The Voice coach then teased, “By mincing garlic!”

Legend, born John Roger Stephens, then took to Instagram to continue celebrating his achievement. “So grateful to win my 12th Grammy today, my 3rd for Best R&B Album! Thank you to all my collaborators on #BiggerLove, especially my big brother and executive producer @raphael_saadiq,” he wrote. “Thank you to my entire team. We all worked hard to make this album and then promote it during a global pandemic. It wasn’t an ideal situation but we made the best of it and hopefully gave the world some music that helped make their days and nights a little better. Love you all! ❤️❤️❤️❤️❤️.”

The “Tonight” artist’s failure to recognize Teigen resulted in her calling him out via social media. She tweeted, “This motherf*cker???? Helloooo?? Caption!!!!”

When the longtime couple attended the 2020 ceremony last January, the “Ordinary People” hitmaker took home the Grammy for best rap/sung performance for “Higher.” Even though the duo watched the 2021 ceremony from the comfort of their own home on Sunday, they got all dressed up for the occasion.

The pair have been able to count on each other through thick and thin, including when they lost their child Jack in September 2020 after Teigen experienced pregnancy complications.

“I didn’t know that we could experience this grief and also share it,” the Grammy winner said on Good Morning America in November 2020. “But when we did it really meant so much to so many people. And it was such a powerful experience for me to learn that, and I’m just grateful that my wife was courageous enough to do it.”

Legend additionally noted, “I just know that I love my wife more than ever. We’ve been through so many challenges together and they’ve made us stronger. And I know that doesn’t always happen when people go through tragedy, but I feel like the challenges we face together have made us feel even more sure about who we are together as a couple, and who we are as a family.”