Home » Entertainment » By order of the Peaky Blinders, season 6 will be followed by a film 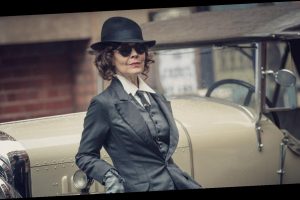 Here’s everything we know about the sixth and final season of Peaky Blinders, and the film that will follow it.

It’s been a great week for Peaky Blinders fans. The gangster series, which follows the lives of the Shelby family in Birmingham’s post-war slum neighbourhoods, has just started filming its sixth and last season. But that’s not all. It’s also just been announced that a Peaky Blinders film will follow the final episode.

Peaky Blinders: The real story behind Jessie Eden and her fight for women’s rights

The excitement started earlier this week when the official Peaky Blinders Instagram account shared a photo of Cillian Murphy getting his infamous Shelby undercut while wearing a mask.

It then shared another photo of filming in action during season five, with the caption: “The Shelbys are back in business. Series six of Peaky Blinders has begun filming.”

“Peaky is back and with a bang,” creator and writer Steven Knight said in a statement. “After the enforced production delay due to the Covid pandemic, we find the family in extreme jeopardy and the stakes have never been higher.

“We believe this will be the best series of all and are sure that our amazing fans will love it.While the TV series will be coming to an end, the story will continue in another form.”

As you can imagine, this final line caused many fans to theatrically gasp.

Knight has now confirmed that a film is also in the works. As reported by Deadline, he said: “Covid changed our plans. But I can say that my plan from the beginning was to end Peaky with a movie. That is what is going to happen.”

While details about the movie are being kept under wraps, executive producer Caryn Mandabach told Deadline more about what to expect from the next season: “This final season of our beloved Peaky Blinders is going to be the best one yet. Steve’s uncanny ability to be prescient about world events is only matched by his ability to make Tommy Shelby the most indelible character of our times.”

To very quickly recap what happened in the cliffhanger ending of Peaky Blinders season five, Tommy’s plan to assassinate his political rival Oswald Mosley (the leader of the British Union of Fascists, based on the real person), failed and his own men were shot dead. So the big question he has in season six is: who betrayed him?

It looks like we won’t have long to wait for some answers.