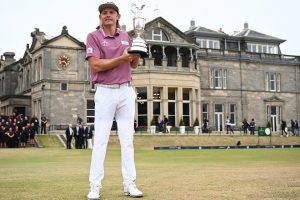 Australian golfer Cameron Smith came back from a four stroke deficit on Sunday afternoon in Scotland to win his first ever major championship at historic St Andrews.

Along with the iconic Claret Jug trophy, the win cut Cameron Smith a $2.5 million USD check, and elevated him four spots in the Official World Golf Ranking to second behind Scottie Scheffler.

Starting the final round four shots behind Rory McIlroy and Viktor Hovland, the 28 year old Smith went out in 34 and remained three behind McIlroy halfway through his round. It was on the 10th hole that the Aussie found his groove, stringing together five straight birdies to overtake McIlroy.

On the notoriously difficult 17th (nicknamed the Road Hole), the new leader found himself in an impossible spot in front of the green, but he managed to skirt his third shot precariously around the cavernous bunker. His 10 foot par putt found the cup, and then he added a birdie to boot on the final hole to cap off an eight under par 64.

Smith finished the tournament at -20, which matches the lowest score in relation to par ever in a major, last achieved by Dustin Johnson at the 2020 Masters. Cam Smith’s back nine 30 and five birdie streak become yet another chapter in Open Championship and St Andrews lore.

This historic final round wrapped up amid rumors of several more players joining the LIV Tour. This could include Smith, who declined to answer questions regarding the matter after his round, as well as 2023 Ryder Cup captain Henrik Stenson.

Should Stenson sign with LIV, it is expected that he would be stripped of the captaincy.