Home » Entertainment » Can Art Help Save the Planet?

Can Art Help Save the Planet?

It’s not just the subject of passionate political debate.

It’s at the heart of a growing number of museum exhibitions this year, including the works of old masters and exhibits built with high-tech innovations, designed to inspire artistic appreciation and a desire to respond to environmental challenges.

Among the shows: The much-anticipated “Hudson Rising” at the New-York Historical Society; “Nature’s Nation: America’s Art and Environment,” in Salem, Mass., which looks at 300 years of American art through an environmental lens; “Documenting Change: Our Climate (Past, Present and Future)” in Boulder, Colo. And more.

“There’s a crescendo of interest in both art that is itself about the environment and art that is self-consciously environmental, and I think that’s entirely understandable and good, because it draws attention to these dire situations we’re facing,” said Karl Kusserow curator of American Art at the Princeton University Art Museum.

Dr. Kusserow is a co-curator of “Nature’s Nation: America’s Art and Environment,” which includes paintings, artifacts, sculpture, prints, photographs and decorative art. It started at the Princeton University Art Museum and is now showing at the Peabody Essex Museum in Salem until May 5. It will end at the Crystal Bridges Museum of American Art in Bentonville, Ark., from May 25 to Sept. 9.

“The impetus grew out of my concern for climate change, and my recognition and realization that I could bridge my concerns as a citizen with my work as a scholar,” said Dr. Kusserow, who spent seven years developing the show with Alan Braddock, associate professor of Art History and American Studies at the College of William & Mary.

The goal of the exhibition, he said, is to view famous and lesser-known art through ecological glasses: how the environment is represented in images and how humans’ place in the world is depicted. 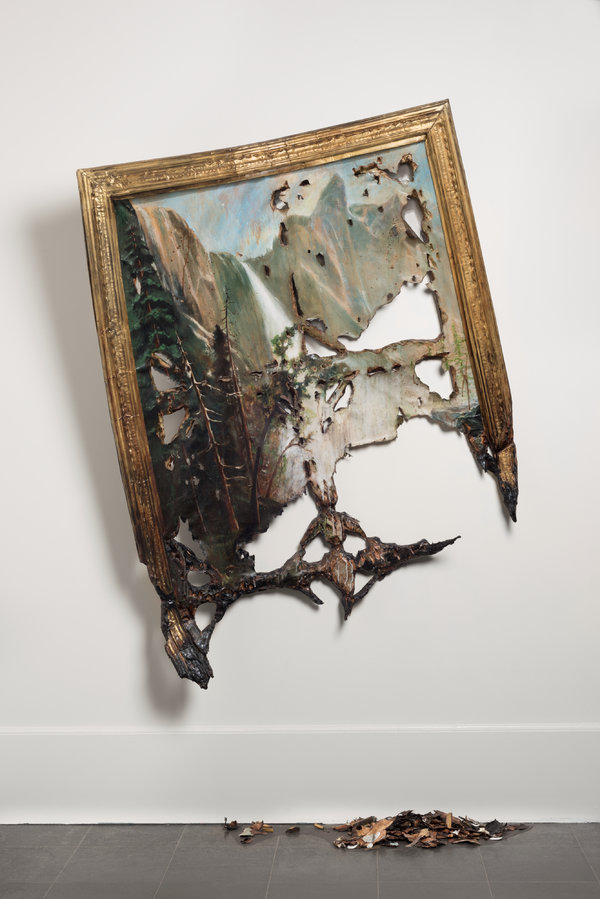 “It asks people to think in new ways about iconic works,” Dr. Kusserow said. For example, the famous 19th-century painting by Albert Bierstadt, “Bridal Veil Falls, Yosemite” — a lush painting of one of the national park’s waterfalls — is hung alongside a work by the artist Valerie Hegarty from 2007, “Fallen Bierstadt,” which shows the same painting askew, burned and ripped.

“Bierstadt presents a certain way of understanding nature as beautiful and unpeopled and full of animals and grain and enduring and static, and Hegarty takes that same image and literally dematerializes it,” he said.

Another painting — “Prisoners From the Front,” by Winslow Homer — is an image traditionally interpreted as a confrontation between a Union officer and Confederate soldiers. But the surrounding landscape looks barren, and the show focuses on the environmental effects of the Civil War on the land, which included deforestation and the burning of crops. It was a strategy of the North and South and “it really had dire environmental consequences,” Dr. Kusserow said.

The show offers one of the most comprehensive exhibits ever on the Hudson River, with the goal of not simply looking at ecological changes, but understanding how the river “became an incubator for environmental activism,” said Marci Reaven, the museum’s vice president for history exhibitions.

The exhibition proceeds chronologically and geographically from the 1800s and the building of the Erie Canal through today. It displays the beauty of the Hudson through the museum’s extensive collection of Hudson River School paintings, as well as photographs and tourist memorabilia, such as posters from the 1930s encouraging people to take a day trip on the river. But it also shows the toll that tourism and industry have taken.

“All of its uses and passions come into conflict with each other,” Dr. Reaven said. “There is a growing awareness the region may not be able to be all things to all people.”

The show highlights activism over the years to save the Hudson.

In the early 20th century, organizations such as women’s clubs and preservationist societies protested the rock blasting of the Palisades cliffs overlooking the river from New Jersey and helped create Palisades Amusement Park, which became one of the most visited in the country.

In the 1960s and 1970s activists fought, and ultimately defeated, a plan by Con Edison to build a plant on Storm King Mountain on the river’s west bank in New York. Visitors to the exhibition can see a yellow political button with the slogan, “Dig they won’t … Save the Hudson,” and hear the folk singer Pete Seeger’s song “My Dirty Stream,” a mournful ode to the polluted river.

The end of the exhibition will be a look toward the future and how to reclaim the Hudson River in response to climate change, showcasing projects already underway, such as reeflike structures, known as “living breakwaters,” that can decrease the impact of waves, and help restore the shoreline.

“The idea is to look at what has been resolved and what are the new challenges,” Dr. Reaven said. “What is the river teaching us, how will climate change unfold in the region and how are people preparing?”

The University of Colorado Art Museum, using resources at its doorsteps, is showing “Documenting Change: Our Climate (Past, Present and Future), until July 20. It encompasses 70 works of art by 30 artists.

It includes pieces by Tali Weinberg, who incorporates climate change data and drought data into the textiles she weaves, and a four-hour video by Peggy Weil, “88 Cores,” which connects images from 88 ice cores from the nearby National Science Foundation Ice Core Facility.

The Climate Change Museum in New York City will hold an exhibition at its temporary home on Governors Island from May 4 through Oct. 31. The museum last year installed 10 solar powered traffic signs that looked like digital highway messages, but issued warnings such as “Climate Change at Work.”

From March 16 through June 14, the museum, in partnership with the New York City Department of Education Office of Sustainability, will present “Climate Speaks,” a training program and competition focused on spoken word and poetry related to climate change and social justice. The finalists will appear at the Apollo Theater in Harlem on June 14.

The theme of the Cooper Hewitt Design Triennial is “Nature, ”from May 10 to Jan. 20, 2020. It will include 62 projects focused on how designers and artists are collaborating with scientists, engineers, environmentalists and others to “find potential solutions — to make steps to save our planet,” said Caroline Baumann, director of the museum. “And I include the ‘make steps’ because some of these are speculative — they are provoking the viewer.”

The show will include a “smell series” by the designer Alexandra Daisy Ginsberg and the olfactory artist Sissel Tolaas that recreates the aromas of extinct flowers through DNA drawn from specimens preserved at the Harvard University Herbaria. There will also be an organic cotton burial suit by the designer Jae Rhim Lee, which contains biodegradable materials that also break down toxins in the human body.

And outdoors will be “The Tree of 40 Fruits” by the artist Sam Van Aken — a real tree that has apples, pears, plums, peaches, cherries and apricots grafted on it using century-old methods to preserve rare fruit.

Although very different, the exhibitions have one thing in common: using a mixture of chronology, geography, materials, ideas and collaborators to express something that can at times seem indescribable.

“We’ve got a tremendous desire on the part of scientists to engage with different audiences and a desire on the part of humanists and artists to grapple with the immensity of the problems we’re facing right now,” ” said Erin Espelie, co-director of the Nature, Environment, Science & Technology Studio for the Arts at the University of Colorado. One way to do that, she added, is through the art museum “bringing people together outside political affiliation and into a different environment that allows for more empathy.”