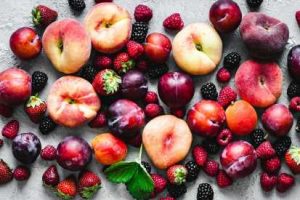 Eating colorful fruits and vegetables may be good for your brain.

A new study, one of the largest such analyses to date, has found that flavonoids, the chemicals that give plant foods their bright colors, may help curb the frustrating forgetfulness and mild confusion that older people often complain about with advancing age, and that sometimes can precede a diagnosis of dementia. The study was observational so cannot prove cause and effect, though its large size and long duration add to growing evidence that what we eat can affect brain health.

The scientists calculated their intake of about two dozen commonly consumed kinds of flavonoids — which include beta carotene in carrots, flavone in strawberries, anthocyanin in apples, and other types in many other fruits and vegetables. The study appears in the journal Neurology.

The degree of subjective cognitive decline was scored using “yes” or “no” answers to seven questions: Do you have trouble remembering recent events, remembering things from one second to the next, remembering a short list of items, following spoken instructions, following a group conversation, or finding your way around familiar streets, and have you noticed a recent change in your ability to remember things?

According to the senior author, Dr. Deborah Blacker, a professor of epidemiology at the Harvard T.H. Chan School of Public Health, these long-term findings suggest that starting early in life with a flavonoid-rich diet may be important for brain health.

For young people and those in midlife, she said, “the message is that these things are good for you in general, and not just for cognition. Finding ways that you enjoy incorporating these things into your life is important. Think about: How do I find fresh produce and cook it in a way that’s appetizing? — that’s part of the message here.”

The study controlled for diet apart from flavonoid intake and for physical activity, alcohol consumption, age and body mass index, among other factors that may affect the risk for dementia. Importantly, it also controlled for depression, whose symptoms in older people can easily be mistaken for dementia.

The researchers looked not only at total flavonoid consumption, but also at about three dozen specific flavonoid-containing foods. Higher intakes of brussels sprouts, strawberries, winter squash and raw spinach were most highly associated with better scores on the test of subjective cognitive decline. The associations with consumption of onions, apple juice and grapes were significant, but weaker.

“These are the foods you should be eating for brain health,” said Dr. Thomas M. Holland, a researcher at the Rush Institute for Healthy Aging who was not involved in the study. “There’s some really good data here with 20 years of follow-up.” Still, he added, further follow-up would be needed to determine whether foods might affect the risk of developing dementia.

Paul F. Jacques, a senior scientist at the Jean Mayer United States Agriculture Department Human Nutrition Research Center on Aging at Tufts University who had no part in the research, said: “In terms of scientific advance, this adds to the literature, and it’s a really well done study. It’s a medium sized step, not a large step, going in the direction of helping us to identify the early period in which we can intervene successfully” to reduce the risk for Alzheimer’s disease.

Dr. Blacker pointed to broader policy issues. “If we can make a world in which everyone has access to fresh fruits and vegetables,” she said, “that should help improve many health issues, and lengthen life span.”