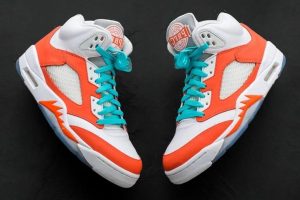 Back in 2016, The Puerto Rico Football Club (PRFC) made its official debut in the NASL which was a franchise owned by Carmelo Anthony and in turn celebrated by the Jordan Brand with an Air Jordan 5 PE. As the silhouette is a player exclusive release, these never made it out to the public except on none other than famed sneaker collector and Miami Heat forward PJ Tucker.

The sneaker was brought back into the spotlight early last year as Tucker walked into the stadium for a game against the Charlotte Hornets wearing the Orange and Teal pair. Knowing how rare these PEs are, Tucker, took up the challenge to claim his own and succeeded with Anthony left in shock as he only managed a “Bro how…” response.

As the NASL has disbanded in 2018, the PRFC team is currently on hiatus, but the sneaker currently lives on to honor the franchise. Thanks to English Sole, we’re able to give the PEs a closer look. Following a unique non-traditional color blocking pattern, the shoe is constructed with a white leather base and bright orange overlays sealing the toe cap and the majority of the laterals surrounding the translucent side panel vents. Teal laces along with a toggle loop over a gray tongue showcasing the club’s logo in place of the signature Jumpman motif. A white midsole sits atop an icy rubber outsole to complete the look.