Home » Entertainment » Casting a ‘Follies’ of the Future, With Beyoncé and Ben Platt

Casting a ‘Follies’ of the Future, With Beyoncé and Ben Platt 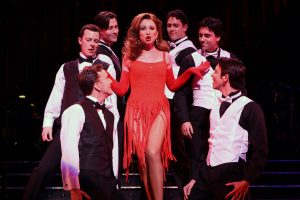 “Follies” is every musical theater nerd’s favorite casting puzzle. It needs names that evoke nostalgia for the showbiz past but also skilled triple-threats who match the characters — and one another. Below, a look at performers who originated the six major roles, and a selection of those who followed over the last 50 years. Plus: Our dream cast for the 2046 revival, when “Follies” will be 75 and the nostalgia will be for today.

Of all the original stars of “Follies,” only John McMartin came without nostalgic baggage. He was a theater actor first — and that’s how Ben, a philanthropist and retired politician, has been cast ever since.

For the 2007 Encores! production, the four-time Tony nominee Victor Garber was Ben to Donna Murphy’s Phyllis. The pair looked perfect together, like a president and first lady.

A former Hollywood hoofer — he played Will Parker in the movie of “Oklahoma!” — Gene Nelson was dead-on casting for the salesman unfortunate enough to be in love with his wife.

When the New York Philharmonic produced a concert version for a gala in 1985, Mandy Patinkin took the role — and shook it for all it was worth.

Sure, he’s already got his mitts on the “Merrily We Roll Along” movie, but wasn’t “Dear Evan Hansen” a de facto audition for Ben Platt to play this walking nervous breakdown, too?

By 1971, Alexis Smith was long retired from Hollywood, where her aloof, glamorous aura made her a star of the 1940s. That persona (and timeline) made her perfect for Phyllis.

Who better than Diana Rigg, that former Avenger, to take the role of a brilliantly imperious wife for the 1987 London premiere?

Lucy is juicy. Jessie is dressy. Or so Phyllis sings, describing her two contrasting halves. Beyoncé is all that, and more. Case closed.

In the 1950s, Dorothy Collins was a lovely B-list songbird on “Your Hit Parade.” In 1971, she still had the voice — and despite a big smile, the acting chops to make Sally dark.

Bernadette Peters took the role in the 2011 Broadway revival, stripping away Sally’s social skin and turning darkness into madness.

Ruthie Ann Miles won a Tony Award for her impassioned rendition of “Something Wonderful” in “The King and I.” Sally’s “Losing My Mind” is another ode to longing worthy of her heart-melting voice.

The former radio star Ethel Shutta was 74 when she originated the role — and debuted its great song “Broadway Baby”; her own Broadway debut was in 1922.

For the 1985 concert, no one was going to get between Hattie and Elaine Stritch, who sang “Broadway Baby” for most of the next 30 years.

In 2046, Bernadette Peters will be 98 — and look 48. Having already played Sally in the 2011 revival, she’ll be perfect for a role she has never played except in real life.

For the same 1985 concert, Carol Burnett — a bigger star than any of the “Follies” characters — was a curveball Carlotta. But no one could sell the setup for her big number better: “It was supposed to be a sad song, but it kept getting laughs.”

How much Carlotta was there in Kiki DuRayne of “Kiki & Herb” fame? More than a splash. In 2046 it’ll be time for her creator, the cabaret chanteuse Justin Vivian Bond, to drink up, close the bar — and bring down the house.