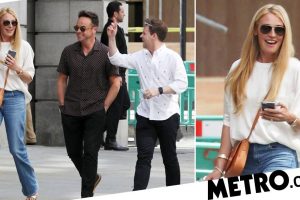 Fan of SM:TV Live when you were younger? Then this reunion between Cat Deeley and Ant and Dec is bound to get you excited.

The presenting trio, who famously entertained us kids every Saturday morning, were seen having lunch together in Central London and it certainly something had put them all in a good mood.

Cat, 43, who relocated to Los Angeles several years ago, was back in the UK and beaming from ear-to-ear as she caught up with Ant and Dec.

Dressed in flared jeans, a white jumper and aviator shades, Cat was seen deep in conversation with the boys and stopped to give Ant a high-five as they later parted their ways.

Just seeing Cat and Ant and Dec back together is enough to get us 90s kids buzzing with excitement, let alone recent rumours doing the rounds that the trio are preparing to bring back Chums – their spoof on US sitcom Friends that aired each week on SM:TV Live.

Everyone was hooked on Cat and Dec’s made up will-they-won’t-they romance and it’s claimed that the presenters are now in talks to bring the segment back for an extended TV special.

Insiders told The Sun that Ant and Dec have penned a script for their much-loved Chums sketch and are hoping some of their famous pals will get on board too.

‘They’ve worked on a script they think justifies bringing it back as part of a TV project they’re in talks for. And they’ve met with Cat in the last couple of weeks and she’s on board too,’ a source told the paper.

‘They’ve started to ask celebrity pals, of which all three have many, to see who fancies taking part in it.’

Plans are still said to be in the early stages, but here’s hoping it takes off.

Metro.co.uk has reached out to reps for Cat and Ant and Dec.

SM:TV Live was on screen from 1998 until 2005 and Chums aired every week for the first three years when Ant and Dec were hosts.

Each week, fans were convinced Cat and Dec would finally kiss (spoiler alert: they were always interrupted) and it wasn’t until the final sketch when Ant and Dec were leaving SM:TV that viewers finally got their wish.

Reports SM:TV could be making a comeback have been doing the rounds since January, earlier this year, when Ant and Dec teased a reboot to celebrate their 30th year of working together.

The pair told fans to ‘watch this space’ and then in April, Cat teased the idea of the show making comeback while remembering how fun it was to film back in the day.

‘You never feel it at the time, because it’s live, and you feel a bit of the pressure of it but looking back on it,’ she told Daily Star. ‘I think it’s the most fun we’ve ever had.’