Rosario Dawson has been a mainstay in Hollywood since her big-screen debut back in 1995. And while she’s consistently worked ever since,  Dawson has flown under the radar, not making too many waves in Hollywood gossip circles. That seems to be a conscious choice for the Jane the Virgin actress, who has let her body of work speak for itself. From television to film, she has been in the business for over 20 years, but it’s her philanthropic work that has proven to be the area that has made an impact on her life.

A recent turn of events in her personal life could make her a more high-profile celebrity in the entertainment and the political worlds. Her boyfriend, Senator Cory Booker, is running for President in 2020. While the election is still over a year away, Dawson has gotten a lot of attention for her relationship status. But as an incredibly accomplished woman in her own right, she doesn’t stand in the shadow of any man.

In honor of her 40th birthday on May 9, here are nine things you need to know about Rosario Dawson.

Her first film raised quite a few eyebrows.

In 1995, Dawson made a big splash with the controversial indie film, Kids. The movie was given an NC-17 rating and focused on a group of New York City teens who were a little too motivated by sex, drugs and alcohol. Kids was also the film debut for Chloe Sevigny. Despite all of the contentious heat around the subject matter of the movie, the film launched both of their two careers.

Speaking with Vice for the film’s 20-year anniversary, Dawson recalled her grandmother’s reaction to the film. “My grandmother was watching it, going, ‘Rosario, you know, I wish you had warned be before I went in,’ and I said, ‘Sorry, if I offended you.’ She responded, ‘You didn’t offend me. I had to have children for a reason. There’s not anything that’s in this that anyone who’s being honest can’t connect to. I just wish you would have told me before I told all my church friends to go.’”

She’s a mom to a teenager.

Dawson adopted an 11-year-old girl in 2014 named Lola. While that might have surprised some of her fans, she knew adoption was always a part of her family plan. “My dad is not my biological father. So when I was younger and they let me know that I wasn’t blood-related to that whole side of my family… I was, like, 5,” she explained to Us Weekly in 2018. “Growing up in the neighborhood that I grew up in, I was like, ‘Oh, so then I could be like some of my friends who have single parent households. Like, that could be me.’ So I remember I told my mom at 5 that when I got older, I was gonna adopt and I was gonna adopt older.”

The duo often post sweet Instagram photos together, even if her daughter doesn’t always approve of her mom’s posts. Lola’s response to Dawson’s post in her birthday suit on her 39th birthday was a typical teenage response. “She was like, ‘Mom, are you posting this stuff?” the Men in Black II star told Access Live. “I have kids that follow you online!’”

Excuse me, but she’s a triple threat.

Dawson isn’t just limited to her acting talents. In 2005, she took on the role of Mimi in the film adaptation of Rent. The role was originally played by Daphne Rubin-Vega in the Broadway production, so she had big shoes to fill. Dawson nailed the role, earning a NAACP Award nomination with not only her acting, but her singing and dancing as well.

Yes, she’s in a relationship with Cory Booker.

The New Jersey senator, and Democratic presidential hopeful, ended the long-rumored speculation that he had a girlfriend when he confirmed the news on The Breakfast Club in February. “I’m dating somebody really special,” he said. “I got a boo.”

That “boo” turned out to be Dawson, who also confirmed the news to TMZ in March. She returned the love to her bae by saying, “I am just grateful to be with someone that I respect and love and admire so much.”

Speaking with Extra about her new beau, Dawson couldn’t help but gush about Booker: “I call him Cab, but Cory sends me a song every day we’re not together, and it’s just stuff like that where I’m sort of like, ‘He is so romantic and beautiful.’ I’m just amazed and excited and blown away by my relationship with this wonderful man and his relationship with me and my family.”

A true Hollywood-D.C. romance can only mean one thing as the Presidential election ramps up: Dawson might be hitting the campaign trail!

Dawson was talking about body positivity years before it became a social media buzzword. In August 2011, she talked to Shape magazine about the praise she received when she lost a lot of weight to play Mimi, a drug addict dying of AIDS, in Rent. “I remember everyone asking ‘What did you do to look so thin? You look great’ and I’m like, I looked emaciated,” she said in her interview with the magazine.

Those compliments didn’t sit too well with Dawson, who emphasized, “I’m constantly telling girls all the time everything’s airbrushed, everything’s retouched… none of us look like that.”

In May 2017, Dawson experienced a major family tragedy when her cousin, Vaneza Ines Vasquez, died in the actress’ Venice, California home. Dawson administered CPR and called 911 in hopes of reviving her cousin. The official cause of death was heart disease and Class III obesity, according to the official autopsy report for the 26-year-old.

Dawson’s work with The Lower Eastside Girls Club is well known because she has been volunteering her time and voice for so long. She’s now on the Board of Directors and actively advocates for the club which aims to be “a safe haven with programs in the arts, sciences, leadership, entrepreneurship, and wellness for girls in middle and high school.”

In 2018, the actress also took part in the RESPECT! campaign to end domestic violence.

Cory is not her first famous bae. 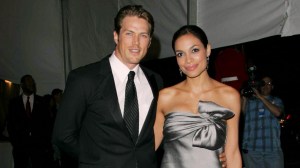 There have been a lot of relationship rumors linking Dawson with various Hollywood men and costars over the years. Some are unsubstantiated, like Colin Farrell on the set of Alexander in 2004 and Gerard Butler, her co-star on 300, in 2007. However, there is one former boyfriend we forgot about, Jason Lewis. The couple dated from 2004 to 2006 when Lewis was hot off his run as Smith Jerrod on Sex and the City. That’s some fun Hollywood romance history!

She has quite a few arrests under her belt.

But don’t worry, they’re all for a good cause! As an activist, Dawson’s been arrested twice — once in 2004 for protesting President George W. Bush at the Republican National Convention in New York City, and in 2016 for crowding, obstructing or incommoding after crossing police lines during the Democracy Spring rally in Washington, D.C.

Speaking with reporters at the time, Dawson said she wanted people to understand that corporate and lobbyist money doesn’t have a place in politics. It’s why she was willing to put herself in a position to be arrested. “This is a tremendous issue and I’m really grateful that I could be here and be a part of it,” she told The Young Turks in 2016. “I wanted for me, personally, to be in solidarity with the people who put themselves on the line.”

Don’t miss Dawson in the series finale of Jane the Virgin on Wednesday, May 15 on The CW.