Celebrities Who Are 'Harry Potter' Fans 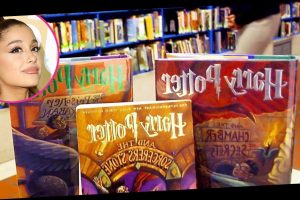 Harry Potter has cultivated a die-hard fandom of Potterheads who know everything from their Hogwarts house to the correct pronunciation of “Wingardium Leviosa.”

J.K. Rowling began writing the acclaimed children series in 1990 while on a delayed train from Manchester, England, to King’s Cross station in London. The story follows 11-year-old Harry — an orphan raised by his mean aunt and uncle — who discovers that he’s a wizard. The U.K. native eventually conceptualized the plot into a seven-part book series over the years.

Rowling told CBS News in 2003 that writing was difficult for her as a single mother to her daughter, Jessica, and living off of welfare.

“I’d walk around Edinburgh pushing her in the pushchair and wait till she fell asleep. And then I would literally run to the nearest cafe and write for as long as she stayed asleep,” she said at the time, adding that her book was rejected by “four of five publishers” before she landed a contract.

Harry Potter and the Philosopher’s Stone was published in the U.K. in 1997. Rowling sold the book to Scholastic, which distributes the story under the title Harry Potter and the Sorcerer’s Stone, in the United States. The release marked the start of a worldwide phenomenon with more than 500 million copies sold worldwide.

As fans became more enthralled by the Wizarding World, Rowling began to feel the pressure to publish new books faster. After rushing to finish Harry Potter and the Goblet of Fire — which clocked in at 636 pages — she decided it was time to slow down.

The first book was adapted into the 2001 movie of the same name starring Daniel Radcliffe, Rupert Grint and Emma Watson. The film franchise — which earned more than $7 billion at the box office — ultimately sparked the prequel series, Fantastic Beasts and Where to Find Them.

Scroll down to see a list of celebrities who love Harry Potter.