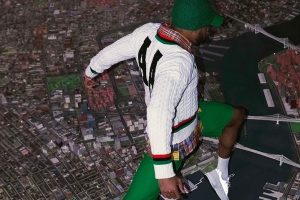 Champion has announced a new collaboration with Tremaine Emory to release a new collection titled “Champion Tears.” Taking its name from Emory’s Denim Tears label, the collection is based around Champion’s Reverse Weave fabrics and its historic archive, with Emory also taking influence from the influential Alvin Ailey Dance Theater.

Throughout thecollection, Champion’s collegiate legacy is referenced on varsity jackets, embroidered lettering and athletic-influenced tracksuits. All of these items pay tribute to Alvin Ailey, with double AA logos alongside “American Dance Theater” text and the U.S. flag crossed with the red, black and green flag of the Universal Negro Improvement Association (UNIA).

The UNIA colors that run throughout the collection — they also appear on hats, jackets and loose knitwear — have been used by Emory in previous collections. Last year’s collaboration with Converse arrived in a similar color palette, inspired by Pan-African flag, which was designed by Marcus Garvey, founder of the UNIA.

Take a look through the collection in the lookbook and campaign video. The “Champion Tears” collection will arrive at select stockists in September this year.

For more from Champion, refresh your memory of its recent Percival collaboration.
Source: Read Full Article